Anderson started the week ranked 36th and he’s seeded seventh for the $442,500 tournament.

American John Isner is seeded first for the event.

Qualifier Austin Krajicek is Anderson’s first round opponent and on paper at least, Anderson should have breeze into the second round.

That’s because Krajicek is ranked a lowly 502nd on the ATP Tour rankings. Better known as a doubles player, the 21-year-old isn’t expected to give Anderson too much trouble. The two have never played each until now.

Meanwhile in the Far East, Raven Klaasen and American partner John Fruttero are seeded first in the doubles section of the ATP Singapore Challenge.

And in New Zealand, our second-ranked South African woman’s player is action in the ITF $25,000 Wellington tournament.

Chanel Simmonds is seeded first for the tournament and she’ll be in action in both the singles and doubles sections of the tournament. She takes on Australia’s Rebecca Leahy in the first round of the singles draw. 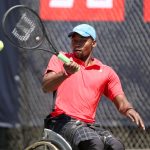 Maripa desperate to get back on court

Tokyo looms, again, We don’t know for sure in what shape of form the Olympics and Paralympics will take place in July to September and if anything 2020 taught us to take nothing for granted. What we do know is that if Tokyo 2020 +1 does go ahead, it will do so against a new-found back drop where simply taking… END_OF_DOCUMENT_TOKEN_TO_BE_REPLACED