Our Kevin Anderson faltered when it counted to miss out on a chance of winning his third ATP Tour tennis title in Sydney on Saturday.

Playing in the final of the Apia Sydney International, 36th ranked Anderson went down to rising Australian Bernard Tomic (No64) in three sets.

Anderson got off to a poor start, his first service game broken, and was soon 3-0 down in the opening set.

After the first set Tomic’s first service percentage was 74% to Anderson’s 65% and surprisingly he out-aced the big-serving South African 3-2.

The second set saw a big improvement from Anderson. He lead on service and could have gone 5-3 up in the eighth game but failed to do so, despite his service game improving to the extend that he only dropped one point in five serve games.

The set went to a tiebreak and Anderson ended up having four set points before serving out 6-2 and taking the set 7-6.

That set took 45 minutes and left the title up for grabs. The fourth game ended up being the longest of the match, just three seconds shy of 10 minutes.

The eighth game saw Tomic with three break points and Anderson gifted it to his opponent in the worst possible fashion, with his second double fault.

That took the score to 5-3 and Tomic had little trouble wrapping up the 6-3 win.

Anderson took the total ace count 13-7 but that would have been scant consolation as he had 26 unforced errors to Tomic’s 20 and two double faults to none by Tomic.

“It was a great atmosphere out there,” Anderson said in his post-match speech.”I know most of you were rooting for Bernard out there but at least we got the better of you in the cricket,” he said referring to the Proteas recent series win in Australia.

Anderson into third round to meet Berdych… again! 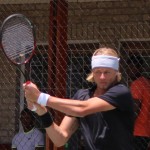 Scholtz safely through in Stellenbosch to make amends

Anderson comfortably through to third round

Tokyo looms, again, We don’t know for sure in what shape of form the Olympics and Paralympics will take place in July to September and if anything 2020 taught us to take nothing for granted. What we do know is that if Tokyo 2020 +1 does go ahead, it will do so against a new-found back drop where simply taking… END_OF_DOCUMENT_TOKEN_TO_BE_REPLACED