Kevin Anderson will be looking to properly celebrate his highest ATP world ranking yet in Cincinnati, US on Tuesday, writes Mark Etheridge.

Anderson, 27, started the week with the news that he’d become only the sixth South African singles player to break into the top 20 of men’s tennis and is now perched at 19th after moving up two spots on the rankings list.

Haas is currently ranked 13th in the world but the good news for Anderson is that he has won the only encounter he’s had against the German.

That was two years ago in Stockholm where Anderson prevailed in three sets, 7-7 6-4 6-4 in a hard-court encounter.

Haas was ranked outside the top 50 for the first part of last year but he has slowly worked his way back to his old form, starting the year at No21 and improving that till his current 13th spot. Eleven years ago, he was ranked as high as No2.

Should Anderson prevail on Tuesday, he’ll come up against Spaniard Marcel Granollers in round two 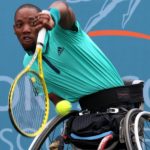 SA trio prepare for SA Open in US