Anderson went out to local player Richard Gasquet in a second round match, after beating Luxembourg’s Gilles Muller in the first round on Monday.

The tournament’s 16th seed, Gasquet won the 1hr 52min encounter in straight sets 6-4 7-6 (4) and set up a potential clash with Roger Federer with the win.

Gasquet could have ended things a bit earlier as he was serving for the match in the 12th game of the set but eventually had to rely on the tiebreaker.

Once again Anderson’s big serving game kept him in contention and he had 13 aces to his credit to just three by Gasquet. He also had the better first service percentage (63% to Gasquet’s 49%) but it was in first service points won that Gasquet had the edge, winning 82% of points compared to 70% by Anderson.

Afterward Gasquet paid credit to his 31st ranked opponent. “The match was very difficult at the start,” admitted Gasquet on the ATP website. “I was able to break him in spite of that, and it made me more confident. And also, I had trouble finishing off the match. It was quite tense in the end, but I’m happy I pulled it out.

“[It would be a great pleasure [to play Federer], although it’s more difficult for me to play him on this surface indoors than on clay. But playing here in Bercy in front of a huge crowd is great, and I feel no pressure.”

Anderson still has some doubles action to deal with before his year is done and dusted. Him and American John Isner are in first round action against American Eric Butorac and Dutch Antilles player Jean-Julien Roger, the same combination that beat them in the semi-finals of last week’s Valencia Open in Spain. 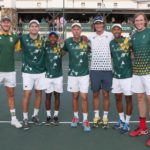 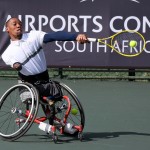 Kevin through to semis

By GARY LEMKE in Tokyo On the third day of staying in the Paralympic village bubble “it” finally dawned on me. “It” wasn’t the sheer visual aspect of the 4 000-plus Paralympians with disabilities all in the same environment of towering 17-storey apartments and surrounded by a 4km perimeter fence. Admittedly, that is the initial and most common conclusion of… END_OF_DOCUMENT_TOKEN_TO_BE_REPLACED