Eighteen aces from big-serving Kevin Anderson saw him notch another good victory and move into the third round of the Sony Ericsson Open in Miami, Florida.

Unseeded Anderson accounted for 24th seeded Guillermo Garcia-Lopez (26th in the world rankings) as he went past the Spaniard in a tough three-setter, 6-3 5-7 4-6, writes Mark Etheridge.

The top-ranked South African won the aces count 18-5 and also had only one double fault compared to the five of his opponent.

The match on Court Three lasted 2hr 22min and Anderson will be happy with his 76% first service percentage, compared to Garcia-Lopez’s lowly 51%.

Anderson will now come up against yet another Spaniard in the shape of Pablo Andujar who knocked out his countryman and ninth seed Fernando Verdasco in a three-set clash.

Andujar is currently ranked 69th in the world and Anderson, 29th placed higher, should be quietly confident of his chances of making the next round in the $3.6m tournament. 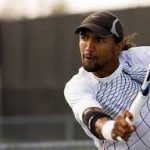 Raven’s on the move up the world rankings

Kevin into 3rd round

By GARY LEMKE in Tokyo On the third day of staying in the Paralympic village bubble “it” finally dawned on me. “It” wasn’t the sheer visual aspect of the 4 000-plus Paralympians with disabilities all in the same environment of towering 17-storey apartments and surrounded by a 4km perimeter fence. Admittedly, that is the initial and most common conclusion of… END_OF_DOCUMENT_TOKEN_TO_BE_REPLACED