Two of our London Olympic marathoners, Lusapho April and Tanith Maxwell, are making merry in May, writes Mark Etheridge.

Making a successful return to the Hannover Marathon, an event which he won two years ago, April romped to an excellent time of 2hr 08min 32sec. Lusapho, 30, clocked 2:09:25 for his 2011 victory, a personal best at the time.

The KwaZulu-Natal athlete is running into some good form lately. Just a month ago she won the Vienna half-marathon in Austria with a time of 1:17:17.

Back to April though and he made his move on the flat course four kilometres after the halfway mark. This after the leaders had gone through halfway in 64:48.

He was assisted by Kenyaman pacemaker Frederick Ngeny. “I asked him if he could continue until 30 kilometres. That was very helpful and I thank him for that,ÔÇØ April told Time-to-Run website.

ÔÇ£It was the first time in my career that I started a marathon race fully fit and without any problems,ÔÇØ said April, who had been unlucky when he fell at the 30km watering point during the Olympic Marathon in London.

He went on to place 43rd in London. His coach, Karen Zimmerman, explained they decided to have a longer break after the Olympics and then start the build-up for Hannover.

The last time that a South African ran quicker than April was Hendrik Ramaala with a 2:07:44 in 2009. ÔÇ£With a faster pace in the first part of the race and in cooler conditions I could have run sub 2:08 today,ÔÇØ said April. 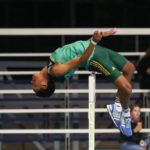 Another high jump milestone for Poole

By GARY LEMKE in Tokyo On the third day of staying in the Paralympic village bubble “it” finally dawned on me. “It” wasn’t the sheer visual aspect of the 4 000-plus Paralympians with disabilities all in the same environment of towering 17-storey apartments and surrounded by a 4km perimeter fence. Admittedly, that is the initial and most common conclusion of… END_OF_DOCUMENT_TOKEN_TO_BE_REPLACED