Banyana Banyana will look to finish off the task at hand when they take their 3-0 Olympic soccer qualifier’s first leg advantage into the second leg encounter against Ethiopia at the Addis Ababa National Stadium on Sunday.

A hat-trick by Banyana Banyana striker Noko Matlou cemented the advantaged in favour of the South Africans during the first leg match played in front of 30 000 fans at the Orlando Stadium in Soweto on August 27.

However, national coach Joseph Mkhonza has been quick to warn his players that the job is only half done.

ÔÇ£The players know that they are so close to qualifying for their first Olympic Games and are determined not to let the Olympic dream slip away,ÔÇØ said Mkhonza at the team’s training session at the School of Excellence near Johannesburg.

ÔÇ£Thanks to our team sponsor Sasol and Safa, we have had a solid preparation time span for these key matches and one can see the difference that practice time together makes when it comes to passing and controlling the ball,ÔÇØ he added.

The Ethiopians will have to play a more attacking style of play than they did in the first leg but could find the visitor’s defence even tougher to break down, with the return of defender, Janine van Wyk who will be looking to claim her position back; this promises to be a major boost for the South Africans.

With Van Wyk expected to return to the centre of defence alongside teenage sensation Amanda Sister, the Head Coach has the option of re-instating Yola Jafta into the centre of midfield.

Jafta, who plays her club football for the University of Johannesburg in the Gauteng Sasol League along with national team-mates in team captain Amanda Dlamini, Zanele Sukazi and Matlou, deputised for Van Wyk during the national team’s 5-0 friendly international triumph over Mozambique in Atteridgeville and the victory over Ethiopia in Soweto.

ÔÇ£We certainly won’t go into defensive mode against the Ethiopians now that we have a 3-0 advantage,ÔÇØ said Mkhonza.

ÔÇ£Playing in African countries often delivers surprises, but we scored three good goals against Ethiopia in Soweto and are quite capable of getting some more goals in Addis Ababa.ÔÇØ 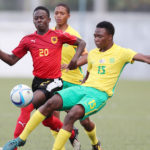 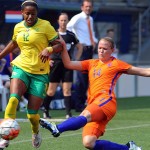 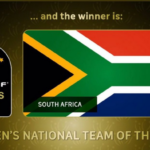 Banyana Banyana are queens of Africa!

Tokyo looms, again, We don’t know for sure in what shape of form the Olympics and Paralympics will take place in July to September and if anything 2020 taught us to take nothing for granted. What we do know is that if Tokyo 2020 +1 does go ahead, it will do so against a new-found back drop where simply taking… END_OF_DOCUMENT_TOKEN_TO_BE_REPLACED