The national camp is a continuation of the team’s preparations for their first appearance at the Olympics Games, to be held in London in July.

The other newcomer is midfielder Jade Davids, who plays her club football for Galaxy FC in the Sasol League KwaZulu Natal.

ÔÇ£This is further proof that the door is still open as far as picking the best players for the Banyana Banyana team that will fall under Team SA at the Olympics is concerned,ÔÇØ said Mkhonza.

ÔÇ£We will assess these players to see if and how they fit into the Banyana Banyana set up and stand by our mandate to send the best of the best players to the London Olympics in a bid to do our sports-loving nation proud.ÔÇØ

The national coaches will spend Saturday, April 14 in Bushbuckridge, Mpumalanga, to assess player talent at the Sasol League Road Show, to be held at the Thulamahashe Stadium.

The Banyana Banyana squad for Stellenbosch: 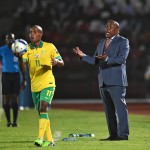 Tokyo looms, again, We don’t know for sure in what shape of form the Olympics and Paralympics will take place in July to September and if anything 2020 taught us to take nothing for granted. What we do know is that if Tokyo 2020 +1 does go ahead, it will do so against a new-found back drop where simply taking… END_OF_DOCUMENT_TOKEN_TO_BE_REPLACED