Our national Under-20 women’s football team, Basetsana, will aim to end their qualification for the FIFA U20 Women’s World Cup on a high when they host Nigeria at Dobsonville Stadium, Soweto on Saturday.

Basetsana go into the second leg on the back of a 6-0 loss in the first leg played in Nigeria about two weeks ago. But goalkeeper and captain, Kaylin Swart said the team was fully aware of what they were up against. She added that the return leg should be a different story as they are playing at home.

ÔÇ£I must say, we expected a tough one but what happened was not what we wanted, to be thrashed 6-0 in Nigeria was a great disappointment for us, nothing went our way. We are looking to come back in the match on Saturday. We have to look past the experience we had in Nigeria and come back in the second leg.

Fellow teammate and High Performance Centre centre-back, Meagan Newman said the approach in the second leg would different and that the mind-set would have to change if they are to emerge victorious.

ÔÇ£We have always known that the Nigerians are a dominant side and we knew what to expect when we played them in the first leg. It is unfortunate that we return with a heavy loss but we want to have a different approach to Saturday’s match,ÔÇØ said Newman.

Newman was among the eight HPC matriculants who successfully completed their Grade 12 and will be looking forward to furthering her studies at the Jackson State University in Mississippi, USA later this year.

Two teams from Africa will represent the continent at the 2014 edition of the women’s World Cup to be staged in Canada from 5-24 August. 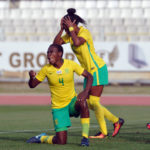 Banyana come from behind to hold Zimbabwe

By GARY LEMKE in Tokyo On the third day of staying in the Paralympic village bubble “it” finally dawned on me. “It” wasn’t the sheer visual aspect of the 4 000-plus Paralympians with disabilities all in the same environment of towering 17-storey apartments and surrounded by a 4km perimeter fence. Admittedly, that is the initial and most common conclusion of… END_OF_DOCUMENT_TOKEN_TO_BE_REPLACED