The national Basetsana women’s Under-20 football side are back in camp as their qualifying campaign for next year’s FIFA U20 World Cup in France continue.

Basetsana went into camp on Sunday to prepare for their away leg fixture against Burundi at the Prince Louise Rwagasore stadium on Saturday.

Basetsana will host the second leg two weeks later and will be hoping to go into that fixture with a comfortable away result.

South Africa comfortably progressed to the second round of qualifiers after thrashing Namibia 9-0 on aggregate in the first round. The going will be slightly tougher against the East Africans who will looking at causing an upset against their more fancied opponents.

Basetsana head coach, Maud Khumalo will be without some of her key players who are currently busy with their final matric exams but the former Banyana Banyana midfielder believes she has suitable replacements who can plug into the gaps which include the absence of captain and leading goalscorer, Linda Motlhalo.

‘We have a tough task ahead of us. Burundi are not to be underestimated and we need to ensure that we are mentally and physically fit for both fixtures. We are missing a few players due to exams but this is what we deal with at junior level. It is something we have thought of and we believe that the players that have been called up can and will do the job for us,’ said Khumalo.

Basetsana jet off to Burundi on Thursday, via Kenya and will have one final training session on Friday before their match the following day.

Progression into the third and final round will see Basetsana taking on either Nigeria or Morocco to fight for a place in next year’s world showpiece set to take place In France between 5-24 August.

Basetsana are yet to feature in a FIFA World Cup qualifier and will be looking to rewrite the history books by becoming the first U20 side to achieve this feat. 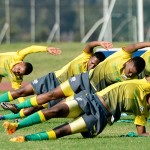 Away win for Mashaba’s men

By GARY LEMKE in Tokyo On the third day of staying in the Paralympic village bubble “it” finally dawned on me. “It” wasn’t the sheer visual aspect of the 4 000-plus Paralympians with disabilities all in the same environment of towering 17-storey apartments and surrounded by a 4km perimeter fence. Admittedly, that is the initial and most common conclusion of… END_OF_DOCUMENT_TOKEN_TO_BE_REPLACED