Our Amawheelaboyz wheelchair basketballers lost the second match of their European tour in Belgium on Thursday nightÔÇª but it’s not all bad news, writes Mark Etheridge.

This was due to the fact that it was the squad’s first match in six months.

Then on Wednesday night they came up against Canada in a friendly match ahead of their scheduled Test matches against Canada, Netherlands, Australia and Italy the 8th Eastern tournament scheduled for Blankenberge this weekend.

They ended up being on the wrong end of a 67-41 scoreline against Canada but Fick still took heart from the defeat. “Once we changed to man-to-man defense in the second half we only went down 27-30.

“The team are still really positive and everyone got good court time.” 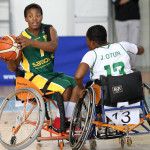