Already having qualified for the Paralympics in London later this year, by virtue of their victory in the continental qualifying tournament in Morocco last year, the team started their matches off with a match against club opposition.

“We played a friendly against a First Division club (Gent) and won 72-64,” said coach Patrick Fick.

“This was without two of our starting five and we tried out different combinations because it’s our first match in six months.

“It was a reasonable result but there’s still lots of work needed,” said Fick. 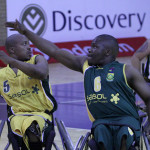 Amawheelaboys are looking good ahead of Rio qualifiers

By GARY LEMKE in Tokyo On the third day of staying in the Paralympic village bubble “it” finally dawned on me. “It” wasn’t the sheer visual aspect of the 4 000-plus Paralympians with disabilities all in the same environment of towering 17-storey apartments and surrounded by a 4km perimeter fence. Admittedly, that is the initial and most common conclusion of… END_OF_DOCUMENT_TOKEN_TO_BE_REPLACED