He may have been beaten twice in his individual judo matches at the African Region 5 Games here but Team South Africa’s Regan Wilson is a man whose judogi suit is a coat of many colours.

The 19-year-old Western Cape athlete lost in both his 60kg bouts (he’s in the blue suit above) and cut a visibly disappointed figure after his elimination.

But unlike the majority of athletes here at the Games, Wilson had a second chance and one which he grabbed with both hands.

In judo he fights as an able-bodied athlete… but when it comes to track athletics he’s a visually impaired athlete in the T13 class.

‘I’ve never had great sight, I was just born like that,’ explained Wilson after his judo bouts. ‘Then I picked up a very bad bout of hay fever which the doctor said contributed to my sight getting even worse.

‘I can see things that are far away pretty clearly but anything very close is blurred.’

And while judo is his first love (he’s been doing it since the age of nine) he’s clearly not a bad runner.

‘I only started running about three years ago,’ says Wilson who attended the Athlone School for the Blind (multiple Paralympian Hilton Langenhoven went to the same school).

‘I really felt bad after my judo fights, it’s not nice to be so over-dominated but the good thing is that I learned lots of things for the future.’

Moving on to the athletics and Wilson was rewarded with a bronze medal in the T12 100m sprint on Monday. And there’s more to come with Tuesday’s 200m.

Just goes to show, when one door closes another is opening for the 19-year-old Delft judoka/athlete! 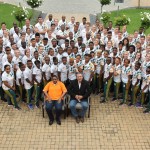 Judoka ready to get to grips for Team SA

By GARY LEMKE in Tokyo On the third day of staying in the Paralympic village bubble “it” finally dawned on me. “It” wasn’t the sheer visual aspect of the 4 000-plus Paralympians with disabilities all in the same environment of towering 17-storey apartments and surrounded by a 4km perimeter fence. Admittedly, that is the initial and most common conclusion of… END_OF_DOCUMENT_TOKEN_TO_BE_REPLACED