When it comes to the numbers game, the fighting Breytenbach twins are a winning combination.
The TuksSport High School duo of Donné and Thomas returned from the recent Commonwealth Judo Championships in Port Elizabeth and their sporting returns made for impressive reading.
Between the two of them they won four gold medals in their respective weight categories at the national ranking tournament and won 16 of their 17 points with a maximum and definitive score of ippon.
Sticking to numbers and Donné has some impressive stats as well. Said proud brother Thomas: ‘It’s quite exciting to see her fighting because she usually manages to win within 30 seconds.’
The twins ascribe their success to the ‘teaching’ of Nikola Filipov (head coach at Tuks/HPC and a former Bulgarian Olympian) and the support and camaraderie of the judoka at Tuks Judo Club.
‘Nikola is like a second dad to us. A strict but fair dad,’ explains Donné. ‘He’s an amazing coach. What I really appreciate about him is that he makes sure that he always stays up to date with what is happening in international judo. He spends hours on the internet every day, doing research, sending emails or skyping the coaches of top judokas to exchange ideas with them.’
Thomas agrees that Filipov, who was judo coach for Team South Africa at the 2012 Olympics in London, goes out of his way to ensure that they train in exactly the same fashion as most of the top judokas in the world.
‘He’s an absolute perfectionist. When he demonstrates a new technique, he does not accept half measures. He will make you do the same thing over and over again until you get it right.
‘And he’s also a master when it comes to getting you into the right mindset. According to him pain should never be a factor. If you get hurt during a fight, you only start worrying about it afterwards.’
Donné adds that Filipov is also a master strategist. ‘In my final at the Commonwealth Championships I was not sure which technique I should use to ensure a victory.
‘Nikola immediately knew what I should do. I followed his advice and won,’ said Donné.

Picture of the Breytenbach twins courtesy of Reg Caldecott 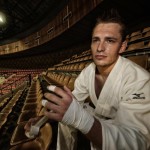 Olympian judoka Van Zyl maps out his plans for the mat

By GARY LEMKE in Tokyo On the third day of staying in the Paralympic village bubble “it” finally dawned on me. “It” wasn’t the sheer visual aspect of the 4 000-plus Paralympians with disabilities all in the same environment of towering 17-storey apartments and surrounded by a 4km perimeter fence. Admittedly, that is the initial and most common conclusion of… END_OF_DOCUMENT_TOKEN_TO_BE_REPLACED