Failure to convert goalscoring opportunities was the Investec South Africa women’s hockey team’s undoing as they lost the battle for fifth place 2-1 to Belgium in the Champions Challenge in Dublin on Sunday, reports Jon Cook.ÔÇ¿ÔÇ¿

South Africa dominated the first half, and Belgium the second, but the Africans will reflect on how their winning the majority of goalscoring chances didn’t translate into victory. Erica Coppey and Alix Gerniers did the damage for Belgium with Tarryn Bright replying for SA after the score was 0-0 at half-time.

ÔÇ£The girls have got to take their opportunities,ÔÇØ was rueful SA assistant coach Fabian Gregory’s summation.

With eight from the London 2012 Olympic team not in Dublin, this was a new combination well-led by Lenise Marais and on a steep learning curve but much has been achieved in broadening the player base with the long-term in mind. Six of the eight are still available for SA.

The opening salvo came in the eighth minute when Bright’s slap shot from the first penalty corner saw South Africa’s attackers come close to connecting the rebound off keeper Aisling D’Hooge’s pads.ÔÇ¿ÔÇ¿SA had had two more excellent chances with the match barely 15 minutes old but it appeared that a lack of self-belief let them down at times, an area the coaching staff and Etienne van der Walt of Neurozone are working with.

Midway through the half, keeper Sanani Mangisa smothered a Belgian attack by coming off her line and cutting the angle. Then Lilian du Plessis got in a shot before Aline Fobe’s effort was superbly saved by the SA stopper at the other end.

Jade Mayne’s close control brought SA’s second PC with 10 minutes left but 18-year-old Tanya Britz’s deflection off Lesle-Ann George’s pass flew over the crossbar. Then Quanita Bobbs (20) fed Sulette Damons down the right and the pass went to SA Under-21 skipper Izelle Lategan whose shot from close was blocked.

The most clear-cut chance came with three left when Bernie Coston’s pace down the right opened the path for a powerful, pinpoint cross that Lategan failed to connect with a metre from the goalline.ÔÇ¿ÔÇ¿ At seven decent opportunities to two, SA deserved a half-time lead and the match continued in the same vein soon after the re-start when Bobbs combined with Coston but another great opportunity came and went.

Marais made a vital intercept at the other end before Lategan’s athletic deflection off Bright’s cross went wide.ÔÇ¿ÔÇ¿Belgium won their first PC after 48 minutes but Marais was on the post to deflect away and then the Europeans got another after a Mangisa deflection save. A brace of Mangisa reflex saves followed before Coppey buried the rebound (1-0).

With 15 minutes left Gerniers made certain of the two-goal margin when she smashed in a rebound (2-0). Then Britz’s shot on the turn was swatted away by D’Hooge before Shelley Russell won SA’s third PC, which Belgium blocked.

Mangisa gloved Gerniers away soon after before blocking another. D’Hooge made a crucial save from Bright with seven left before Lategan was robbed of a PC.ÔÇ¿ÔÇ¿With a minute left Mayne’s volley was blocked, as was Bright’s, and a final PC after the final hooter was smashed in by Bright but it was too late to make a difference. 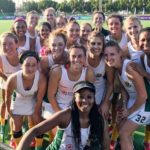 Big win for SA women and men draw against Egypt

By GARY LEMKE in Tokyo On the third day of staying in the Paralympic village bubble “it” finally dawned on me. “It” wasn’t the sheer visual aspect of the 4 000-plus Paralympians with disabilities all in the same environment of towering 17-storey apartments and surrounded by a 4km perimeter fence. Admittedly, that is the initial and most common conclusion of… END_OF_DOCUMENT_TOKEN_TO_BE_REPLACED