South Africa struck gold on the opening day of the African Canoe Sprint Championships in the Tunisian capital of Tunis on Thursday when they bagged two gold and two silver medals.

After tasting gold for the first time Le Roux claimed his second gold medal in the Junior men’s K2 1000m with Under-16 Soweto schoolboy Siyabonga Tylki (pictured right). They managed to power away from the rest of the field and claim the gold medal by a mammoth 15 seconds over a pair of local Tunisian paddlers.

This result is a major achievement for Tyiki, who lives in the informal settlement of Motsoaeledi. The Bona High School student was a contributor to his school claiming the Gauteng Canoe Union School League this year after they registered the most points throughout the year.

This year Tylki and his partner Johan Ubbink took first place in the Under-18 section of the SA K2 Championships at the Vaal River Canoe Marathon which suggests that the Soweto youngster has a bright future in the sport of canoeing.

For Pietermaritzburg resident Le Roux the gold medals on the first day of competition are an added bonus considering his strongest events are still to come and he could double his medals tally when he gets onto the water for the 200m K1 and K2 events.

It has been a fairly quick rise for the youngster who has been competing in sprint canoeing for only two years after following in his brother Warren’s footsteps by getting involved. He has been in the top two in the country in his age group since Under-16 and after a slightly disappointing showing at the Sprint World Championships this year he will be happy to be on form again at the African Champs.

In the K1 events the South African contingent claimed medals in both of the races that they competed in with Under-23 Martin van den Bergh claiming the silver medal in the mens K1 1000m behind Tunisian Mohamed Ali Mrabet. Mrabet was pipped by manager Phillip van Tonder as Van den Bergh’s stiffest competition and it was the more experienced Tunisian who claimed the gold medal.

The final medal that the South Africans bagged was a silver medal in the Men’s K2 1000m race. It was the pair of Luke Stowman and Joseph Williams who won the fourth medal for Team South Africa when they came in three seconds behind the Tunisian combination and just ahead of the Algerian pair.

Friday’s day two sees the girls in action with the 500m events as well as the qualifying heats in both the men’s and women’s 200m events. If day one is anything to go by the chances of the South African team picking up more medals seems to be quite high. 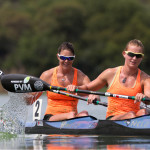 Hartley and Co head for senior, junior and U23 World Championships 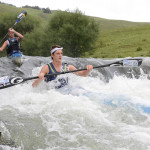