George Ntshiliza became the first South African winner of the Old Mutual Two Oceans ultra-marathon since 2007 in Cape Town on Saturday when he strode to the closest finish in years.

Ntshiliza ended a run of three victories by other African countries, Zimbabwe, Kenya and Lesotho respectively as he crossed the finish line at UCT in 3hr 08min 31sec after 56 thrilling kilometres.

That after a thrilling final run-in to the tape where he made up a 1min 10sec deficit with six kilometres to go.

At the top of the gruelling Constantia Neck climb the two leaders were Mike Fokoroni of Zimbabwe and Motlhokoa Nkhabutlane of Lesotho, the brother-in-law of last year’s winner, Mabhutile Lebopo.

But Nedbank Running Club’s Ntshiliza hunted them down and caught Nkhabutlane with less than a kilometre to run and the shouts of the awaiting crowd audible.

Ntshiliza took home R250,000 for first prize as well as additional incentives from his running club and shoe sponsors and his total haul would probably approach the R500,000 mark.

“It’s great to have a South African winner of our race again,” beamed Ntshiliza, who hails from Motherwell in Port Elizabeth. “I knew I was in good shape because I trained way better than before last year’s Oceans where I clocked 3:25.

“I pushed hard from about the marathon mark and especially hard on the downhills and once I got close to Motlhokoa I knew I had him, I could see he was looking back and was tired.”

Weighing just 53kg, Ntshiliza proved that you don’t need to train at altitude in order to be a Two Oceans heavyweight. “I did all my training at the coast and today’s win is proof that you don’t necessarily need altitude training.”

Ntshiliza warmed up for Saturday’s run with a 29:14 10km in Port Elizabeth just a week ago to confirm his sharpness. “To be honest I went into the race looking for a top 10 finish and a sub 3:15 time but this race is tricky. You can never tell for sure!”

Good news for lovers of road running is that, unlike countless other top marathoners, Ntshiliza has no plans to run the 90km Comrades Marathon anytime soon. “No ways. I’m hoping to defend my title next year as well as work on my marathon times.”

Encouraging for South Africa is that four local runners made the top 10, compared to just one last year.

In the women’s race it was business as usual for the Nurgalieva twins with Olesya winning her third Two Oceans title to go with wins in 2008 and last year. Her and sister Elena now have three wins apiece.

“I was aiming to make sure I was in the top three and the win would be a bonus,” said Olesya after her 3:33:58 win. “I made my first move at about 30km on the first real uphill and felt great. It all went well after that.’

Elena didn’t have the best of runs. “At 33km I had a terrible pain in my leg and thought my race was over. But I took a painkiller and it got a bit better. It was the same pain I had in Comrades in 2005 but I hung in there and it came right. On that occasion I still had 80km to run so I told myself that today I only had 23km to endure and it was all OK.”

Elena had to battle back to pass fellow Russian Nina Podnesbesnova after her leg problems but fought back well to end in 3:37:54. There was a brave run for third when Lesotho’s Mamorallo Tjoka came home in 3:42:12 despite battling leg cramps for much of the race.

“It was one of my hardest races ever,” said Tjoka. I had cramps at 23km and 40km but told myself to just fight hard for a top five finish.”

The women’s results mean that Gwen van Lingen’s 3;43;03 in 2001 is the last South African woman to win Oceans.

In the increasingly popular half-marathon, Lusapho April defended his men’s title in 63:58, comfortably holding off runner-up Xolisa Tyali by 20sec.

“I felt great today,” said April. “I made my move at 12km on the big climb and thought that if the others can catch me it’s up to them.

“Now I’ll focus on marathons again [he’s currently SA marathon champ]. I want to run London Marathon next year and in May I’m running the Hanover Marathon in Germany. Last year I ended fifth there in 2;10;44.’

The women’s half-marathon saw Namibia’s Helalia Johannes win a ding-dong battle with Johannesburg’s Irvette van Blerk. Johannes came out tops in the end, but had to break Rene Kalmer’s race record of last year to ensure her win. Johannes clocked 71:56 to Van Blerk’s 72;04.

“I missed last year’s race because I couldn’t get off from work but it was great to be back this year. Johannes is a lance-corporal in the Namibian Defence Force and certainly there was no stopping her victory march on Saturday.

Doing her best was Van Blerk though. ‘We broke away at about 8km and swopped leads many times,” said the Nedbank runner. “Each time I thought I had done enough she would come back at me and when she made her final push in the last kilometre my body was hurting everywhere and just didn’t have enough.’

Last year’s champion, Kalmer had a day to forget after ending fourth in 76:19, 3:40 down on last year. ‘I had bad ITB (knee) problems from the start and battled all the way. I’m hoping physio can sort it out quickly though.” Certainly, she’ll be hoping that’s the case. She’s planning on running her debut international marathon in Prague, Czech Republic on the same day that April runs in Hanover. 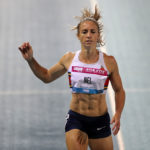 Win for Nel as she fine tunes for Gold Coast

By GARY LEMKE in Tokyo On the third day of staying in the Paralympic village bubble “it” finally dawned on me. “It” wasn’t the sheer visual aspect of the 4 000-plus Paralympians with disabilities all in the same environment of towering 17-storey apartments and surrounded by a 4km perimeter fence. Admittedly, that is the initial and most common conclusion of… END_OF_DOCUMENT_TOKEN_TO_BE_REPLACED