In the final countdown to the N3TC Drak Challenge Canoe Marathon, a large field studded with local and international stars has started assembling in the Southern Drakensberg for the two-day marathon that will also decide the SA K1 River Championships titles for 2014.

With the iconic Dusi Canoe Marathon just around the corner, at least three paddlers from fancied Dusi crews are on many analysts’ shortlist of 2014 Drak Challenge laurels as they look to get their hands on the highly sought-after title whilst getting some invaluable Dusi training under the belts too.

Prior to turning his attention towards tackling this year’s Dusi with new doubles partner Jasper Mock├®, three times world champion Hank McGregor (Kayak Centre/Team Jeep) says he is eager to return to Underberg where he has reigned supreme three times previously.

McGregor, pictured right and having missed out on the Drak in 2013 due to his participation in the Perth Doctor in Australia, will be particularly hungry to stake his claim for his place on the top step of the podium this time around.

Last year’s Dusi victor Lance Kime (Best 4 Healthcare/EuroSteel), fast emerging as one of the country’s leading elite men’s river paddlers and Valley of a Thousand Hills hero Thulani Mbanjwa’s (Build it) 2014 Dusi partner, will undoubtedly be out to prove he too can mix it up at the front of the field outside of the uMsundusi or uMngeni River valleys.

Triple Dusi champ Andy Birkett (EuroSteel) is another who, having made a name for himself in the three-day spectacle from Pietermaritzburg to Durban, will be hoping the vast periods of time he has spent training in Underberg will pay off at this year’s Drak Challenge.

Birkett’s Dusi partner, Sbonelo Zondi (EuroSteel), may not be seeking a Drak Challenge podium but a top 10 in Underberg would serve the 2013 Dusi darling’s confidence a world of good whilst Mbanjwa too will be hoping for a solid pre-Dusi hit out.

Dusi Queen Abbey Ulansky (Best 4 Healthcare/Kayak Centre), who now resides in Canada, has confirmed she too will be a part of the fascinating women’s Drak mix having once again made the journey back to South Africa for the Drak/Dusi period.

Two children later and a new country she now calls home, Ulansky’s life has changed rather dramatically since her paddling heyday a few years ago. A Drak podium will undoubtedly be the last thing on her mind as instead she looks to get as much as possible out of the Underberg showdown and ahead of her primary focus, the Dusi, getting underway mid-February.

Adie’s Dusi partner, Anna Adamov├í of the Czech Republic, is another to have confirmed her Drak participation. However her lack of experience on the river in a K1 will mean the canoe marathon ace is unlikely to look to be too much of a serious factor right at the very sharp end of the action. 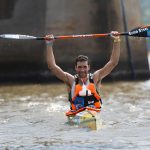 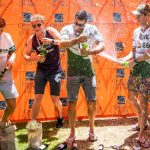 Cook and Jacobs take the spoils

Zondi hangs on to Dusi lead with a day to race

By GARY LEMKE in Tokyo On the third day of staying in the Paralympic village bubble “it” finally dawned on me. “It” wasn’t the sheer visual aspect of the 4 000-plus Paralympians with disabilities all in the same environment of towering 17-storey apartments and surrounded by a 4km perimeter fence. Admittedly, that is the initial and most common conclusion of… END_OF_DOCUMENT_TOKEN_TO_BE_REPLACED