Caster Semenya powered to an impressive double at the Yellow Pages South African track and field championships in Durban on Sunday, winning the 800 and 1 500 metre titles in the build-up to defending her 800m title at the 2011 World Championships in Korea later this year.
Semenya’s double was part of a great day of athletics as SA 400m hurdles recordholder LJ van Zyl won the national title and also clocked the second fastest time yet run by a South African.

World champion Semenya, 20, formerly at the centre of a gender-test controversy, was far too strong for the 800m field at Durban’s Kings Park Athletics Stadium. She led from the start and ran away from defending champion Mapaseka Makhanya to win in 2min 2.10sec.

Semenya produced a burst of pace to come from way back and breeze past leader Lebogang Phalula to win the 1 500 in 4:12.93. Semenya ran both races in the space of an hour and 20 minutes on the final day of the two-day nationals and appeared to be holding back in both victories in hot and humid conditions in the east coast city.

In her favoured two-lap event, Semenya went through the first 400 in 61 seconds but cracked on the pace down the home straight to pull well ahead of second-placed Makhanya, who was more than two seconds back in 2:04.52. Semenya was in complete control throughout, running in sunglasses and the light blue and red colors of her province, Gauteng North. Despite missing out on the sub-2 minute time she had targeted before the nationals, Semenya gave her season a significant boost. “I was a little bit upset (to miss out on 2 minutes),” Semenya said in a TV interview. “I still have the season in Europe, I’ll try to get under two minutes in Europe as I didn’t manage it today.”

Semenya hopes to defend her title in Daegu, Korea later this year, two years after she won gold in a South African-record 1:55.45 at the 2009 worlds and was ordered to undergo gender tests.

In Durban, the world champion was outside her season-best 2:01.77 — which she ran in March — but still claimed the national title she was unable to compete for in 2010 after being sidelined for 11 months because of the gender controversy. The Pretoria-based runner was finally cleared to compete again last July.

“I’m not thinking about those things anymore,” Semenya told the South African Press Association. “That’s in the past and I’m looking to the future. “I’m just concerned with winning the world championships and the Olympics next year.”

In the men’s 400 hurdles final,┬á Van Zyl continued his early season form to win in a blistering 47.73 seconds, the second-fastest time ever by a South African and just outside the national record of 47.66 seconds the 25-year-old Van Zyl set in February. The times are the two best in the world this year.

Van Zyl was pushed all the way by defending champion Cornel Fredericks as the pair went shoulder to shoulder through 350m, with Van Zyl holding off his rival in the final sprint. Fredericks ran a personal best 48.14 for second.

Former Commonwealth champion and 2010 silver medallist Van Zyl missed out at the South African nationals in the last two years, finishing fourth after a tactical blunder in 2009 and disqualified for a false start last year. 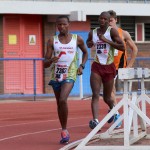 Shange walking tall after two SA records in one week

Tokyo looms, again, We don’t know for sure in what shape of form the Olympics and Paralympics will take place in July to September and if anything 2020 taught us to take nothing for granted. What we do know is that if Tokyo 2020 +1 does go ahead, it will do so against a new-found back drop where simply taking… END_OF_DOCUMENT_TOKEN_TO_BE_REPLACED