Ipeleng Khunou, who famously competed in the Two Oceans on crutches, has put his weight behind the ‘67 Kilometres for Mandela Day’ virtual race and has challenged colleagues in the sporting and entertainment world to do the same.

The virtual race, which is raising funds for the Nelson Mandela Children’s Fund ahead of Mandela Day, invites walkers, cyclists and runners to join the virtual event online from anywhere in the world to make a huge difference to the children of South Africa.

The challenge can be completed anytime between today and 18 July when Mandela Day is acknowledged. This year also celebrates the 25th year that the Nelson Mandela Children’s Fund has been in existence.

In 2018, Khunou participated in the Virgin British 10km in London in support of the Fund. He says: ‘Madiba’s message was always centred on giving of oneself and being of service to our society. This was an opportunity for me to once again support the work of the Fund and I encourage everyone to make this their cause this Mandela Day.’

Participants can log on to the dedicated virtual event software online at www.vfcseries.com and create a profile and link their smart devices. Daily data uploads are plotted on the virtual route, overlaid into a Google Street view so they can see how they are comparing to other ‘racers’ in the same event – in real time.

Exercise data linked to all major smart devices are supported with the virtual race app available at Android and Apple stores. 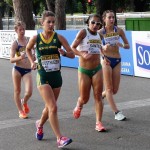 Bolt on being a legend