The Investec South Africa women’s hockey team had plenty of opportunities to score in the Investec London Cup bronze medal match against world number three Germany at Sunday but were outdone by the clinical finishing of their European opponents, who won 6-2 after leading 2-1 at half-time.

Holland beat Australia 4-1 in the final.

Against South Africa, Germany scored through Natascha Keller, Kristina Hillman, Julia Muller, Janine Beermann (2) and Katharina Otte while Dirkie Chamberlain and Pietie Coetzee got on the scoresheet for South Africa.

World number 12 SA took the game to the Germans and had many chances that might have been converted on another day but Germany were content to wait for a mistake when the girls in green and gold were on attack high in the field and counter-attacked to deadly effect.

The half-time score was 2-1 to Germany with their successes due to a Keller penalty corner and Hillman’s field goal. SA scored in between in this 10-minute period when Chamberlain pounced on Coetzee’s initial strike.

While SA continued to conjure up a steady supply of opportunities after the changeover they only had world record holder Coetzee’s 241st goal in 245 Test matches to show for it while Germany got four goals in a 19-minute period through Muller’s penalty corner and field goals from Beermann (2) and Otte.

ÔÇ£We played very well against Germany in the first half today and while they got four goals in the second half, we had more goal shots,ÔÇØ said Gregory. ÔÇ£If we are more clinical in our finishing and defend well there is no reason why we can’t get a medal at London 2012. I am happy with what we achieved and am excited about what we can still achieve in the build-up to London 2012.ÔÇØ

Marsha Marescia, who had an outstanding tournament in the team’s engine room, believes London 2012 will be more competitive than Beijing 2008. ÔÇ£We leave this tournament motivated in knowing there is still work to be done,ÔÇØ said the SA captain.

The SA players now go into a three-week physical training programme at bases in Cape Town and Johannesburg before returning to Europe in early July for two unofficial Test matches apiece against Holland and Great Britain before a Four Nations event against hosts Germany as well as fellow London 2012 contenders New Zealand and Belgium. 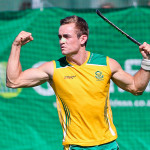 Honours shared by SA and Ireland in six-goal thriller

By GARY LEMKE in Tokyo On the third day of staying in the Paralympic village bubble “it” finally dawned on me. “It” wasn’t the sheer visual aspect of the 4 000-plus Paralympians with disabilities all in the same environment of towering 17-storey apartments and surrounded by a 4km perimeter fence. Admittedly, that is the initial and most common conclusion of… END_OF_DOCUMENT_TOKEN_TO_BE_REPLACED