National decathlon champion Willem Coertzen pulled out of this weekend’s European competition in Kladno, Czech Republic, failing to cement a second qualifying effort for the London Olympics later this year.

Coertzen qualified initially with his SA record points tally of 8244 at national championships in Port Elizabeth in May.

Since then confusion has arisen whether Coertze needs a second qualifier on international soil. Competing at the TNT-Fortuna event Coertzen pulled out after seven of the 10 events.

“I just really had a very bad weekend, everything that could go wrong, went wrong,” he told Road to London 2012 on Monday.

“The first day the wind was quite strong but manageable, but the second day was a different story. It┬á rained the whole day and during during warm-up in the discus I almost broke my neck the circle was so slippery.

“Then during pole vault my coach and I decided not to go on cause of the risk of injuring myself during pole vault, it’s not fun to vault when its raining and not very safe. I think about four guys no-heighted.”

The attrition rate was severe with only 14 of 26 starting competitors finishing. “That kind of sums it up, some guys didn’t do badly, but they had to push on cause they are still looking for qualifiers. Overall I think my head wasn’t too switched on because of all the stuff that’s happened the last few days but we’ll just have to see.”

The weekend’s winner was Dimitry Karpov with a tally of 8173 points. Putting things into perspective, Coertzen’s season’s best was 71 points more and means he still sits in seventh spot on the 2012 rankings.

The Olympic A qualifying standard is 8200. 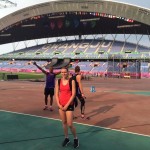 Simbine, Palframan lead the way for SA athletes in Korea

Tokyo looms, again, We don’t know for sure in what shape of form the Olympics and Paralympics will take place in July to September and if anything 2020 taught us to take nothing for granted. What we do know is that if Tokyo 2020 +1 does go ahead, it will do so against a new-found back drop where simply taking… END_OF_DOCUMENT_TOKEN_TO_BE_REPLACED