He fought his way to a top 10 finish in track and field’s most gruelling event but our Willem Coertzen is already working out how to get better at the Rio de Janeiro Olympics in 2016.

London based Coertzen competed in his first Olympic Games this week and ended the decathlon with an extremely credible ninth place out of 31 starters.

He failed to improve on the 8244 points that saw him notch an SA record at the national championships in Port Elizabeth earlier this year. But for now he’ll take his top 10 spot quite happily.

He ended on 8173 points behind victorious Ashton Eaton’s 8869 points.

Summing up his competition Coertzen pointed out that the long jump and pole vault where the difference between his score and bettering his SA record.

“My long jump was definitely one of the low points. I don’t really know why it didn’t go well because is always been one of my solid events (he jumped 7.17 metres). But luckily I picked myself up and ended the first day strongly.”

His second day started off with two personal bests and he was looking forward to upping his score in the pole vault. But that wasn’t to be.

“The pole vault went good butI had a problem with the poles ÔÇô the bigger poles that I use were in my training partner British decathlete Dan Awde’s bag and for some reason they didn’t bring his bag out and when I asked for it nobody knew where its was, so I had make do with the poles that wer in my bag,” he told Road to London 2012.

“On the day they were just too small and I couldn’t get a decent height, which is a shame as I felt like I was jumping great but needed bigger poles. When I got to 4.60 the poles where just not giving me anything back and just flying through the bar.

“I definitely feel like I could have jumped a PB and that would have put me in a great position to break my SA record and finished seventh or eighth but its one of those things, I have a history with pole vault, always something that happens,” he laughed.

Summing up and Coertzen wouldn’t swop it for the world.

“It has been an absolutely awesome experience I may have wanted a bit more,score wise but this was a major championship and there’s a bit more pressure and so stuffs tend to go wrong a bit.

“But other than that the rest was an amazing experience I enjoyed the 1500m so much (4:26.52) ÔÇô I felt so easy, almost like I could run the whole day ÔÇô it was probably all down to the crowd, they were unbelievable, the best crowd I have ever competed in front of.”

Now its upward and onward with Rio very much in this thoughts. “My goal was to finish in the Top 10 and that’s what I achieved, absolutely ecstatic about that, all the hard work and sacrifice was worth it and now I can just move forward.

“I feel like I am only now starting to find my feet in this event so still a lot to come from me and hopefully┬á if all goes well I will be in Rio in 2016, trying to beat what I have done here in London and keep improving my SA record.” 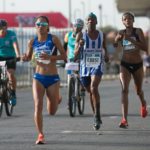 LJ and Co in medal hunt