Three days into the XII CANA African Swimming Championships at the Stadium Swimming Pool in Bloemfontein and the South African medal charge showed no signs of slowing down.
Another 11 medals came South Africa’s way, taking their tally to 35 (17 gold, 11 silver and seven bronze). That puts them well ahead of Algeria, Egypt, Seychelles and Morocco, the other medal winners so far.
Port Elizabeth’s Kaylene Corbett (17) led the South African charge, the Pearson High School product winning the 50-metre breaststroke final and also breaking the 2008 Championship Record of 32.64 seconds, when she touched the wall in a golden time of 32.58.
Teammate Hanim Abrahams came a close second in 33.08 and Egypt’s Mai Atef third in 33.44.
In the 400m freestyle, it was Caitlin Kat who came out tops in 4:24.74. SA’s Jessica Whelan was in the lead for the first three laps but Kat’s sprint in the last 200m proved too strong and Whelan finished with the bronze in 4:29.68, as Algeria’s Souad Nefissa Cherouna came second in 4:26.44.
Mariella Venter was quick off the block in the 100m backstroke, easily winning in 1:02.44, over three seconds ahead of Seychelles’ Alexus Laird in 1:05.53 and Egypt’s Ingy Abouzaid in 1:06.50.
Martin Binedell and Neil Fair were too quick for Egypt’s Ahmed Hamdy, walking away with the gold and silver in the 200m backstroke in 2:03.43 and 2:04.33 respectively, to Hamdy’s bronze time of 2:07.45.
In the 50m butterfly, Rio Olympian Douglas Erasmus added another gold medal to the host nation’s tally in 24.33, while Alard Basson claimed the bronze in 24.83 and Egypt’s Hassan Yasser the silver in 24.64.
Algeria grabbed their second gold of the competition in the 100m freestyle, with Oussama Sahnoune claiming the gold in a new Championship Record time of 49.60 ahead of Mzansi’s Calvyn Justus in 50.21 and Egypt’s Mohamed Samy in 50.29.
The 4x100m freestyle ladies relay saw Algeria take home the gold in 4:00.92 ahead of Egypt in 4:06.62, while the South African team missed out on another medal opportunity after being disqualified due to a false start.
In the men’s 4x200m freestyle relay, Olympian Myles Brown, Josh Dannhauser, Brent Szurdoki and Calvyn Justus claimed the gold in 7:36.80 to end the evening on a high note ahead of Egypt in 7:38.89 and Morocco in 8:10.37.
The CANA Annual Congress will be held on Wednesday, while the athletes take a much-deserved rest day, with the swimming action back on Thursday, starting with the heats at 10:00, while the finals will begin at 16:00.

Picture of Corbett in action courtesy of Gerhard Steenkamp/SuperImage Media

Hill on the nationals 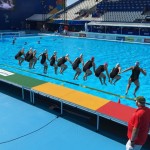 Skipper White on what water polo needs to stay afloat 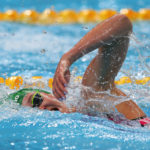 No finals but African record for SA relay team in Hungary

Tokyo looms, again, We don’t know for sure in what shape of form the Olympics and Paralympics will take place in July to September and if anything 2020 taught us to take nothing for granted. What we do know is that if Tokyo 2020 +1 does go ahead, it will do so against a new-found back drop where simply taking… END_OF_DOCUMENT_TOKEN_TO_BE_REPLACED