An 11-strong squad has been named by Cycling South Africa to take part in the first leg of the UCI Track World Cup series in Manchester, England on 1-3 November.

This in line with CSA’s strategic build-up to next year’s Commonwealth Games in Glasgow, Scotland.

The squad will feature men’s sprint and endurance and women’s endurance disciplines.

Maroejska Matthee is the only woman in the squad.

The team is yet to be finalised as a number of cyclists were out of the country or were unable to attend this weekend’s track cycling Grand Prix and Interprovincial that was hosted in Cape Town. As such the final selection will be made during a week-long track training camp from 14-20 October. Thereafter, the team will depart for a further ten-day training camp in Newport, South Wales. 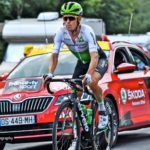 Another Bok star for the Epic

By GARY LEMKE in Tokyo On the third day of staying in the Paralympic village bubble “it” finally dawned on me. “It” wasn’t the sheer visual aspect of the 4 000-plus Paralympians with disabilities all in the same environment of towering 17-storey apartments and surrounded by a 4km perimeter fence. Admittedly, that is the initial and most common conclusion of… END_OF_DOCUMENT_TOKEN_TO_BE_REPLACED