The South African tennis team has made a disappointing start to their Junior Davis Cup final campaign in Mexico.
In a rain-affected first day on Tuesday, fifth-seeded Argentina beat South Africa 2-1.
Argentinian number one, Genaro Oliveiri gave the South American team the first point when he beat Durban’s Damon Kesaris 6-3 6-2. Calvin Jordaan from Cape Town then levelled the rubber when he came back from a set down to beat Manuel Pena Lopez 4-6 7-5 6-2.
In the deciding doubles rubber the Argentinian team of Genaro Oliveiri and Manuel Lopez were too strong for Jordaan and Richard Thongoana winning 6-2 6-2.
‘It was very disappointing as our boys had the tie in their sights,’ said team captain Jared Temlett. ‘Unfortunately my boys played very tentatively on crucial points against the Argentinians and eventually lost in a marathon rubber which went on till 9pm Mexican time. The boys played hard and gave it their best shot, but Argentina proved to be just too good on the day.’
On Wednesday the South African team came up against third-seeded Japan, the Group C favourites. Unfortunately, despite the tie lasting over six hours, Japan beat South Africa 3-0.
Temlett said that after Tuesday’s loss against Argentina, his team discussed strategy, took the positives out of the loss and moved on. ‘I really felt that the boys were ready for Japan and could turn thing around,’ said Temlett.
Temlett said that against Japan ‘the boys really competed well and while the score was 3-0 in the end, it was a very long and gruelling tie as the South African’s boys dug deep against the group favourites.
In the singles Kesaris and Jordaan were unable to apply consistent pressure on their opponents as they both played a high percentage of unforced errors.
Shohei Chikami beat Kesaris 6-4 6-3 whilst Renta Tokuda beat Jordaan 6-4 6-3.
In the doubles Kesaris teamed up with Joburg’s Thongona. The Japanese combination of Shohei Chikami and Riki Oshima beat the South Africans 6-7 (4) 6-3 7-5.
South Africa had the match in their hands when they were serving for the rubber at 5-4 in the deciding set. But the Japanese proved resilient and just too good on the day.
‘While there is a lot to take out of Wednesday’s performances, it was a very disappointing day for the boys who were desperate to get a win under their belt. South Africa will give it our best though against Sweden and you can rest assured we will be back fighting Thursday’ said Temlett.
On Thursday South Africa take on Sweden in their final group tie before play-offs on Friday and Saturday.

In the picture, courtesy of Tennis South Africa, from front to back are:  Kesaris,  Jordaan and Thongoana 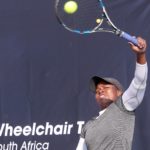 Montjane is up for action Down Under 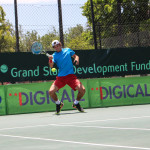 Harris makes it five titles on the trot in Stellenbosch

Tokyo looms, again, We don’t know for sure in what shape of form the Olympics and Paralympics will take place in July to September and if anything 2020 taught us to take nothing for granted. What we do know is that if Tokyo 2020 +1 does go ahead, it will do so against a new-found back drop where simply taking… END_OF_DOCUMENT_TOKEN_TO_BE_REPLACED