South Africa have notched up their second win at the Fed Cup BNP Paribas Europe/Africa Zone Group II tournament in Estonia, writes Mark Etheridge.
After steamrollering Egypt 3-0 in their opening encounter the going got a bit tougher as they eked their way to victory over the host nation Estonia in Tallinn.
The South Africans were on the back foot from early on as Chanel Simmonds went down 3-6 3-6 to Anna Kontaveit. The Estonian was dominant in both serving and returning and kept Simmonds constantly on the defence. She rallied in the second set, edging out to a 3-0 lead but Kontaveit was soon on top of her game again, playing an aggressive baseline game.
But the experienced Chani Scheepers left it all to play for as she used the drop shot to good effect in beating Kaia Kanepi, positioned 35 places above her in the WTA rankings 6-4 6-3. She put plenty of pressure on the Kanepi forehand and this is her second victory over the Estonian, having beaten her at Indian Wells three years ago.
That meant that it was up to Scheepers and Simmonds to win the tie for SA in the remaining doubles clash against Kanepi and Kontaveit.
They lost the first set 3-6 in front of a passionate home crowd.
The South Africans then changed their game plan, shortening the points against the two big-hitters and keeping them guessing.
They bounced back from 3-2 down in the second to take the set 6-3.
The third set was a nerve wracking affair as Scheepers had to save four break points on her service before a Kontaveit error gave the tie to the South Africans
South Africa now face up to Bosnia Herzegovina in their final match of pool action at 4pm on Friday. The latter are yet to record a win in this tournament so South Africa should have little difficulty in wrapping up their pool games unbeaten. 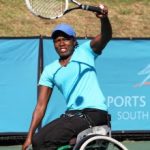 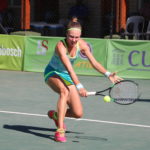 SA trio all advance in Stellenbosch

Tokyo looms, again, We don’t know for sure in what shape of form the Olympics and Paralympics will take place in July to September and if anything 2020 taught us to take nothing for granted. What we do know is that if Tokyo 2020 +1 does go ahead, it will do so against a new-found back drop where simply taking… END_OF_DOCUMENT_TOKEN_TO_BE_REPLACED