Top seed Leon Els won his second Airports Company South Africa Bloem Open men’s singles title as he beat biggest rival Marshall Marsh in straight sets at the Oud Studente Tennis Club in Bloemfontein on Wednesday.
Women’s number one seed Mariska Venter and quad player Danny Mohlamonyane also claimed final victories to retain their women’s and quads singles titles respectively to make it a fantastic competition for the top seeds at the International Tennis Federation (ITF) Futures event in Mangaung.
Potchefstroom’s 28-year-old Els took a 4-0 lead in both sets before wrapping up a surprisingly easy 6-0 6-1 victory in just less than an hour. Els and Marsh then teamed up against Gift Lekhanyane and Alwande Skhosana and enjoyed an easy 6-3 6-1 win to record their second doubles title in Bloemfontein.
Meanwhile, the unstoppable force that is Venter also cruised to her second Bloem Open crown after surviving a scare in the opening set. The Mpumalanga wheelchair tennis queen beat compatriot Thando Hlatswayo 7-5 6-4 to extend her unbeaten run in Mangaung.
The rivals then also joined forces to capture their second doubles title at Oud Studente Tennis Club when they eliminated Nokwanda Hlongwane and Nyosi Nonkanyiso to claim the title.
Meanwhile Danny Mohlamonyane ensured that all the top seeds picked up the titles as he continued his dominance in the quads round robin event and recorded his first crown.
Top juniors Alwande Skhosana and Nokwanda Hlongwane also recorded their second titles on Wednesday when they defeated Mpho Mhlongo 6-0 7-5 and Lucy Shirima from Tanzania 6-2 6-2 for the boys and girls singles titles respectively.

Picture of the title-winning Els courtesy of Reg Caldecott 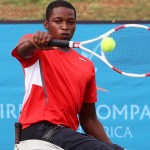 Maripa moves into quarter-finals in Rotterdam

Tokyo looms, again, We don’t know for sure in what shape of form the Olympics and Paralympics will take place in July to September and if anything 2020 taught us to take nothing for granted. What we do know is that if Tokyo 2020 +1 does go ahead, it will do so against a new-found back drop where simply taking… END_OF_DOCUMENT_TOKEN_TO_BE_REPLACED