The two cyclists have now left for home after the championships came to an end. Team manager George Cornelissen is still in Minsk and told Road to Rio 2016: “Berrnard rode a 10.281sec sprint which was 11th fastest and it must be remembered that there were 41 starters.

“He sprinted against a Frenchman Quintin Lafargue and beat him to proceed to the next round.

“There he again came came up against a Frenchman, Francois Pervis who was however too strong for him and sent him into the repecharge. Still, he ended in the top 12 and he’s very impressed with his performance under his coach Andy Spark,” concluded Cornelissen.

Eventual winner of the elite men’s sprint was Germany’s Stefan Botticher from Russia’s Denis Dmitriev and France’s Pervis, the man who beat Esterhuizen. 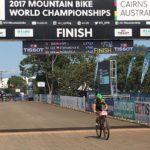 BMX aces gear up for their big weekend

By GARY LEMKE in Tokyo On the third day of staying in the Paralympic village bubble “it” finally dawned on me. “It” wasn’t the sheer visual aspect of the 4 000-plus Paralympians with disabilities all in the same environment of towering 17-storey apartments and surrounded by a 4km perimeter fence. Admittedly, that is the initial and most common conclusion of… END_OF_DOCUMENT_TOKEN_TO_BE_REPLACED