Having been in the competitive racing wilderness for some time, Len Jenkins returns to one of his famous hunting grounds this weekend as he takes on the 2015 Hansa Fish River Canoe Marathon – a race that doubles up as the 2015 South African K2 Championships.
And Jenkins, known as the ‘Fisher King’ for his decade long dominance of the race, will team up with Soweto Canoeing and Recreation Club star Siseko Ntondini.
Jenkins hasn’t been racing competitively for a few years but, after being approached by ADreach – a sponsor of the SCARC outfit – the paddling sensation and Ntondini have been hard at work preparing for this weekend’s clash.
‘Personally I’m a little bit nervous going into the race this weekend,’ the six-time Fish Riiver Marathon winner said. ‘I have normally got a lot more miles in me by this stage of preparation but Siseko has been staying with me for the last week and we have managed to get in some good training.
‘Racing at the front of a race is something that I haven’t forgotten and so I’ve been trying to bring Siseko up to speed with this and pass on my knowledge to him wherever I can,’ he added.
The pair’s partnership came about following an early season race in KwaZulu-Natal when Ntondini was out of a partner and having the backing of Brad Fisher and his team at ADreach is something Jenkins is grateful for.
‘I was doing a race on the Upper Mngeni a few weeks ago and I was chatting to Thulani (Mbanjwa) and Siseko was with him.
‘He said that he didn’t have a partner for Fish and initially I wasn’t too keen but after hearing about where Siseko has come from and the progress that he has made over the years – he has only been paddling since 2006, I said yes!
‘Brad and the guys from ADreach don’t need to be doing what they are doing but both Siseko and I appreciate the effort that they have put in for us; what they are doing for the sport in Gauteng is great!’ an appreciative Jenkins mentioned.
A large part of this new-found combination has been giving Jenkins the chance to pass on a lot of what he knows about racing and competing at the highest level of river paddling in South Africa.
Following a few training sessions and a midweek time trial the pair believe they are ready to head to Cradock. ‘We did the time trial at Blue Lagoon last week where there were some seriously strong K2s out on the water.
‘I didn’t think that we were going to go as well as we did but it was quite encouraging to see.
With combinations such as Hank McGregor and Jasper Mocké, Andy Birkett and Greg Louw, Jakub Adam and Michael Odvarko as well as Brandon van der Walt and Stu Maclaren – amongst many others – all eager to occupy this year’s Hansa Fish podium, Jenkins is reluctant to suggest he and Ntondini have any pre-race title hopes.
‘I don’t think that we are going to win the Hansa Fish but just being able to race hard against ourselves and some of the guys around us will create that race within a race which brings out that competitive edge.
‘We are just going to try and do the best we can and I hope that Siseko can take on a lot of what I try help him with over the two days of racing. If we can both benefit from this weekend then I think that it will be a job well done!’ he concluded.

Picture of Jenkins and Ntondini supplied by Gameplan Media 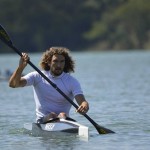 Established and rising stars share the limelight at sprint champs