Pretoria amateur Jason Smith fired a course record eight-under-par 64 to lead the first round of the South African Stroke Play Championship at Blue Valley Golf and Country Club on Tuesday.
The 2014 champion is looking to end a 15-month title drought, but Smith will face a full-blooded challenge from a congested international chasing pack.
Scotland’s Scott Gibson and Aubrey Beckley from North West share second on seven under, while Luke Trocado from Western Province and Southern Cape’s Brandon Cloete avoided the crush at five under with a pair of 66s.
Dylan Mostert from Ekurhuleni carded a 67 to slip into the bus with 2015 Walker Cup player Ewen Ferguson and his Scottish compatriots Bob MacIntyre, Sandy Scott, Italian pair Michele Lea and Philip Geerts, Ireland’s Jack Hume and Victor Veyret from France.
‘I checked the leaderboard when I arrived and saw the guys were shooting the lights out on the front nine, so I knew a low number was on the cards,’ said Smith, who offset bogeys at nine, 16 and 17 with nine birdies and an eagle.
‘I expected a logjam and I’m glad my 64 held up, but now I really regret those two drops at the end of my round. It would have been a lot nicer to sleep on a three shot lead.’
After a hat-trick of birdies from the second, the 21-year-old Irene golfer gambled with an aggressive line off the tee at the par five fifth and was rewarded with his eagle.
‘There is a lot of space on the left, but the further left you hit it, the longer you have to the green. The right has out of bounds, but I took on the shot. Jack Nicklaus always talks about that one in four shots that comes off perfectly and that was it for me. I hit my approach to a foot and made the putt.’
Smith followed with another trio of birdies, three-putted nine for bogey, but gains at 10, 13 and 14 gave him a lot of breathing space.
‘I was 10 under playing the last three holes,’ Smith said. ‘I hit a solid tee shot at 16 and I hit a great shot into the green, but the wind switched and my approach overshot the green.  At 17, the wind grabbed my tee shot again and I finished in the hazard.
‘I was ticked off about the three-putt bogey at nine, but I didn’t hit bad shots at 16 and 17; you have to accept that these things happen sometimes. You can control a lot, but not the elements. I was just happy to finish with a solid par at 18 and finish the round in a great position.’
Gibson from Southerness was equally impressive with half-a-dozen birdies and an eagle on his card.
‘It’s a pity about the bogey at seven, because it cost me a share of the lead, but it was a solid round nevertheless and a great start to the tournament,’ the 21-year-old said.
Following a birdie start, Gibson mailed a seven-iron approach to four feet at the par five third and boxed the putt for an eagle. He reeled in a brace of birdies at five and six and reversed the bogey at seven with another gain at the ninth.
‘I hit a three-wood at seven and saw it bounce, but it bounced well left,’ he said. ‘The ball was wedged in the lip of the bunker and above my feet, but I got it out. Unfortunately I overshot the green and then chipped 12 feet past the pin.
‘I reversed the bogey with birdies at 12 and 13 and parred the rest of the way home. The closing holes are pretty tricky and I made great par-saves at 16 and 17 to keep the momentum going. At 18, I hit my driver a little left at 18 and it pitched under some trees. I couldn’t go for the green, so I laid up and made sure of the par.’
Beckley bogeyed the second, but stayed flawless for the rest of his round.
‘It was great to make a string of birdies and get into the mix early in the championship, because every bit of advantage will help on Tuesday.’
The tournament ends on Friday. 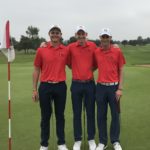 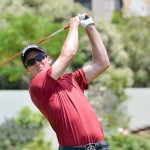 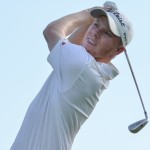 SA quartet off to All-Africa Championships

Tokyo looms, again, We don’t know for sure in what shape of form the Olympics and Paralympics will take place in July to September and if anything 2020 taught us to take nothing for granted. What we do know is that if Tokyo 2020 +1 does go ahead, it will do so against a new-found back drop where simply taking… END_OF_DOCUMENT_TOKEN_TO_BE_REPLACED