Six years and two Olympic Games appearances have come and gone since former KwaZulu-Natal Midlands schoolboy Steve Bird last took part in the Hansa Fish River Canoe Marathon and along with paddling partner Jesse Phillips and Pete McBain the trio will hop into an all Australian K3 for the two-day journey on 7-8 October.
Bird, who has represented Australia in sprint canoeing at the 2012 and 2016 Olympic Games, spent his schooling years at Cordwalles and Michaelhouse in the KZN Midlands before emigrating to Australia with his parents after he finished school. Combining with Cam Schoeman in 2006, Bird and his Maritzburg College partner still hold the K2 Under 18 Boys record at the Hansa Fish.
‘The last Fish that I did was with my racing partner Jesse in 2010,’ Bird said. ‘I have good memories of the major obstacles on the river but nothing really in between.
‘The water level is always really good so it makes the river quite easy to memorise but at least this year I am doing it socially so I don’t have to worry too much about memorising the rapids! I have some great memories about the Fish but my greatest memory must be shooting Keith’s in a K1 when I was fourteen years old!’
Bird has been wholly focussed on sprint paddling for the past nine years, taking part in two Olympic Games, but with a prestigious river marathon pedigree in junior levels to his name he and Phillips will reunite on the river they last competed on in 2010. ’Jesse is my K2 partner and business partner in Australia. We raced together at the 2012 Olympic Games in London and have been paddling together since 2008. He was also my coach at the recent Rio Olympics.
‘Pete is the former CEO of Brierty; a Perth based civil and mining contracting company who have sponsored Jesse and me for the last four years. ‘This is going to be Pete’s first big river race which is really exciting for him!’ added Bird.
River paddling is how Bird and many of the young paddlers in South Africa got into paddling so with his experience to fall back on he is not worried about getting back into the groove when he gets to Cradock next weekend.
‘River racing is where my roots lie and as much as the racing is fun, my fondest memories involve the sense of community I felt when participating. The people you meet along the way and the sharing of a common obsession is a huge draw card of river paddling.
‘Having been on a sprint course for the most part of nine years, I am thoroughly looking forward to being back on moving water,’ he mentioned.
Following an outstanding performance at the Rio de Janeiro Olympic Games Bird is taking time away from sprint racing which has opened the door for him to spend more time in a river boat in his birth country – something he is thinking about a great deal.
‘I’m hoping to plan more trips to SA to paddle in the races that provided so much joy for me when I was growing up, races like the Umko, Drak, Dusi and all the small ones in between.
With my efforts not geared so much towards sprints for a while there will definitely be the opportunity for me to come back and race here more often again so you might be seeing quite a bit more of me on the rivers again!’ he added expectantly. 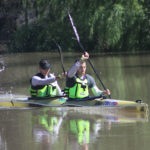 Bryan and Siyabonga strike gold for SA in Tunisia

Tokyo looms, again, We don’t know for sure in what shape of form the Olympics and Paralympics will take place in July to September and if anything 2020 taught us to take nothing for granted. What we do know is that if Tokyo 2020 +1 does go ahead, it will do so against a new-found back drop where simply taking… END_OF_DOCUMENT_TOKEN_TO_BE_REPLACED