Athletics came to the party with a vengeance here on Monday as Team South Africa’s AUS Region 5 Games medal campaign gained momentum in the Angolan capital.

Talking of momentum and Velmein Hendriks is continuing something of a sporting trend. Her father, Pieter, made SA rugby history by scoring the first try of South Africa’s 1995 World Cup-winning saga, against Australia in the tournament opener at Newlands.

Speed clearly runs through the Hendriks genes and Velmein won gold in both the 100-metre hurdles and flat 100m events at a scorching hot Coquerios Stadium.

She clocked 14.19sec for her first gold. ‘It’s my first time over the 74cm hurdles,’ said the 17-year-old Helpmekaar College pupil from Honeydew. ‘But I must say they didn’t feel any higher and I’m pleased to say that I think I had my best start out of the blocks ever. I really felt great.’

Making it a 100m men’s and women’s double was Malesela Senona. The Atteridgville speedster, now at Tukkies, had a comfortable win in 10.48. ‘My best is a 10.34 which I ran in Germiston earlier this year.

This track could be quite fast but it’s rather uneven,’ said the Hennie Kriel trained athlete.

Then it was little Sinelethu Nyanda (guided by Ricardo Gatyana) who got the visually impaired athletes off to a solid start as she won silver in the T12 100m final.

‘I don’t know my time but I’ve run 14.5 before and although this didn’t feel as fast, I’m satisfied,’ said the 16-year-old from Pioneer School for the Blind in Worcester, Western Cape. ‘I ran barefoot with my feet plastered because this track just didn’t feel good for spikes.’

Meanwhile inside the track and in the field events Team SA were on their way to a clean sweep of medals in the men’s shot put. Leading the way was Kyle Blignaut. At 130kg he’s even bigger than gold medal-winning judoka Juan de Bruyn.

Blignaut hurled the shot 18.93m to grab gold. ‘Yes, it was a good day and I felt really good, the rhythm was there from the start and I’m happy with my first time throwing the 6kg shot. Until now I’ve only ever competed with the 5kg weight.

‘I’ll also do discus here but that’s really only my second event,’ said the Pierre Blignaut-coached athlete who goes to Hoërskool Monument in Krugersdorp. Getting silver and bronze behind him were fellow ‘Monnas’ pupil Morne Brandon and Nelspruit ‘s Naas Marais.

Also in field events Renata van Tonder (pictured here) collected gold as she soared to a 5.55m long jump win. The Pretoria-based long jumper’s best is 6.26 but this is still early-season for the brunette, who is bound for Louisville, Kentucky on a sports bursary next year.

And Tharina van der Walt (right) got her second gold on consecutive days. After winning the discus on Sunday she moved on to her specialist event, the hammer and a throw of 53.97 saw the Bloemfonteiner nail a new personal best, by just one centimetre.

Another athlete testing the waters in his event was 400m hurdler, Linford Maree. He was running the high hurdles for the first time but a fluid, flowing style saw him run his way to a gold.

‘The hurdles didn’t actually feel much higher but I have to say that I did feel it over the last 250m,’ said the Paarl Gymnasium scholar, who is jointly trained by Roelof Swanepoel and Sors Joubert.

Over at the adjacent Luanda Tennis Club and Team South Africa’s four tennis players were all playing their way into the finals.

Tuesday sees an all-SA men’s and women’s final after Richard Thongoana and Phillip Henning (pictured above) had won their semi-finals, as did Minette van Vreden and Imaan Hassim.

That sees Gauteng’s Thongoana and Bloemfontein’s Henning meeting in the men’s fault and guaranteeing gold and silver for SA. The two have met on a good few occasions and although While

Thongoana says he has won more of the head-to-head encounters, Henning says he won the last time they met.

Said Hassim (above), who will be heading for Youngstown State University in Ohio, US: ‘We’ve played many, many a time but Minette is definitely leading the way.’

Later, the SA boys and girls both won their doubles semi-finals meaning another gold and silver medal are guaranteed.

Meanwhile the girls’ football team safely manouevred their way past their Namibian opponents at the 11 de Novembre, Stadium. They had beaten Angola 6-0 on the opening day and on Tuesday, goals from Karabo Dlamini (her third of the Games) and Sibulele Molweni did the job.

And the netballers also kept on track for Games glory with a 49-29 win against Zimbabwe who provided far sterner opposition than Lesotho (79-3) on Sunday.

Boxing is also on track with five of the six boxers having qualified for their finals.

Pictures of Hendriks, Nyanda, Henning and Hassim by Wessel Oosthuizen/Gallo Images and of Van Tonder and Van der Walt by Immanuel van Tonder 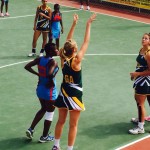 Victory and defeat for SA as Region 5 Games begin

By GARY LEMKE in Tokyo On the third day of staying in the Paralympic village bubble “it” finally dawned on me. “It” wasn’t the sheer visual aspect of the 4 000-plus Paralympians with disabilities all in the same environment of towering 17-storey apartments and surrounded by a 4km perimeter fence. Admittedly, that is the initial and most common conclusion of… END_OF_DOCUMENT_TOKEN_TO_BE_REPLACED