South African cycling celebrated another international milestone at the weekend when national team rider Dylan Girdlestone retained the yellow jersey and the overall lead in the General Classification (GC) to win the eight-day Tour of Rwanda in Kigali.

Cycling South Africa’s national team knew that the final days of the fifth Tour of Rwanda would not be easy as they defended the overall lead for Girdlestone. South Africa’s first Pro-Continental team, Team MTN-Qhubeka, was on the chase and team riders Louis Meintjes and Johann van Zyl were applying pressure at every turn. Team MTN-Qhubeka was also suffering the loss of early GC leader Jay Thomson, who had to retire after falling ill.

The race came to a close with a five-lap circuit race through the streets of downtown Kigali on Sunday. A solo-ride from Algerian Azzedine Lagab in the final kilometres of the race saw him claim his second stage win. Girdlestone, pictured right, who races for the Westvaal-BMC team at home but was representing his country at the Tour of Rwanda, secured victory in the 2013 edition. He also finished third in 2011 and second in 2012.

Girdlestone commended his team for their support in defending the yellow jersey on Thursday’s fourth stage.

Cycling SA Road Commission director, Hendrik Wagener, was pleased with the victory: ÔÇ£The national team rode a calculated race and achieved their goal amidst tough competition. As a federation, we are very proud of the national team’s achievements, especially since they do not always race as a unit throughout the season.

“They worked well together and delivered the results. We are also extremely proud of our Pro-Continental team, Team MTN-Qhubeka, who provided a strong race after a long season abroad.ÔÇØ 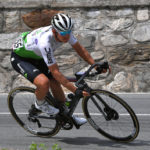 Gibbons and Moolman-Pasio rule on the road

Tokyo looms, again, We don’t know for sure in what shape of form the Olympics and Paralympics will take place in July to September and if anything 2020 taught us to take nothing for granted. What we do know is that if Tokyo 2020 +1 does go ahead, it will do so against a new-found back drop where simply taking… END_OF_DOCUMENT_TOKEN_TO_BE_REPLACED