Top sailors from across the world have converged on Port Elizabeth for the SAP 505 World Championships which got underway at Algoa Bay Yacht Club this week.
And with the bid process having started back in 2010, the SA contingent are relishing the opportunity of competing on home waters.
Sometimes referred to as the Ferrari of racing dinghies, the 505 boat is named for its length of 5.05m and is sailed by two people – helm and crew.
Warwick Ham and his son, Alexander, were the highest finishing South Africans at the last World Championships in Kiel, Germany in 2014, and are teaming up once again to take on the world.
‘It is really a big achievement for all of the South African sailors involved in getting this worlds to South Africa and we are very proud to present the 2015 worlds in PE after a break of 15 years since the last worlds in South Africa,’ said Ham.
‘We had our last training session in PE last weekend and the sailing conditions were some of the best we have seen in PE. We are looking forward to having a large number of South African boats on the water and being able to enjoy a bit of a home advantage, but the quality of sailors in this fleet is so high that they are going to learn the conditions rapidly and the competition will be as tough as at any worlds I have competed in,’ he added.
Describing what the 505 class is all about, Ham explained: ‘The 505 class is 60 years old this year and in spite of this is a very active class with plenty of new, high tech boats being built every year. The boat is very light (127.4kg) and really responds to every puff of wind by accelerating so you get the feeling of speed all the time.
Another of SA’s top-finishing sailors in 2014, who has been involved in the organisation of this world championship, Thomas Funke, explained: ‘It’s all about the rush, the challenge and the technicalities.
The boat is very advanced and can be tweaked to adapt to different wind strengths. This is great as it gives light and heavy crews a fair chance. I also enjoy the speed of sailing a 5O5.’
Speaking about his expectations for the PE event, Funke, who will be competing with his brother Peter, added: ‘This has been a five-year programme and it is hard to believe that we are here now. We want to do well and end in the top end of the fleet, so let’s see.’
The toughest competition is likely to come from the UK, USA and Germany as well as Denmark. As Ham explained: ‘There are several ex world champions entered for this event. The most recent, Mike Holt and Rob Woelfel, who won in Germany last year have decided to each sail on their own boat this year and see whether the crew part of the team is stronger than the skipper part.
‘Mike is from the UK and is sailing with Carl Smit under the USA flag and Rob Woelfel is crewing for Jeff Miller also from USA and both of those boats should be followed closely. Then there is Ian Pinnell, ex world champion from the UK, this time sailing with Johannes Tellen from Germany who promise to be a fast combination, especially if the breeze is up.
‘The Australians are always strong sailors and Michael Quirk and Daryl Roos are probably the team to watch there, but Sandy Higgins and Paul Marsh are also a seriously fast team. Jan Saugman from Denmark, another ex world champion, is sailing this year with his usual crew Jakob Karbo and will be hard to beat.
‘Another USA team consisting of two-time world champion Mike Martin and Adam Lowry are always fast especially in the stronger wind condition,’ he added, also of course mentioning a number of local contenders.
The PE event will take place in two parts – the SA Championships incorporating a pre-worlds event and then the World Championship itself, which will end on April 3.

In the supplied picture, Peter Funke is at the helm and crew is Thomas Funke 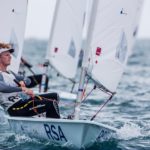 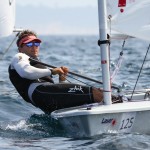 SA 49’er sailors plot their 2014 ambitions and beyond