Two of our top women’s compound archers hit the spot in style in Singapore at the weekend to win gold and silver at the Indoor World Cup, writes Mark Etheridge.

Danelle Wentzel took gold after a demonstration of skill, nerves of steel and precision shooting saw her progressing through the elimination where she came up against fellow South African Gerda Roux.

The World Cup is one of the highlights of the archery calendar and consists of three tournaments where the medallists earn points and the opportunity to compete in the invitation finals. It’s the only competition in which archers can win a cash prize (US$1,000) and other sponsored prizes. All the top archers in the world participate in the World Cup, including reigning world champions and Olympians.

The tournament is made up of a qualification round of 60 arrows at 18-metres, where the “10”, or centre of the target is a little bit larger than the maximum diameter arrow allowed of 9.3mm (that’s about the size of a five-cent coin). At 18m, the centre ring, which carries the highest score is about the size of a pin-head.

Wentzel, who was ranked first in the 60-arrow qualification round,┬á progressed through to the 1/8th eliminations against Wong Lian of Singapore, and took the match 6:2.┬á She then came up against fellow South African, ninth-ranked Bronwyn Uys, beating her 7:3, and going through to the semi-finals. There she overcame France’s Joanna Cheese, winning 6:5.

Meanwhile third-ranked Roux sailed through until the semi finals, eliminating yet another South African, Melinda Steinmann (ranked 11th), in the quarter-finals along the way to come up against Singapore’s Joann Tabanag. She won the 15-arrow match outright taking her to the gold match against Wentzel.

Archery’s profile has steadily been rising in South Africa in recent years. The code was represented by Cape Town’s Karen Hultzer at the 2012 Olympics in London and earlier this year SA brought home the indoor compound men’s silver medal and team bronze medal. 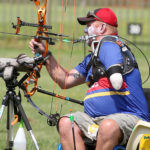 ‘All Gold’ Anderson getting better and better

By GARY LEMKE in Tokyo On the third day of staying in the Paralympic village bubble “it” finally dawned on me. “It” wasn’t the sheer visual aspect of the 4 000-plus Paralympians with disabilities all in the same environment of towering 17-storey apartments and surrounded by a 4km perimeter fence. Admittedly, that is the initial and most common conclusion of… END_OF_DOCUMENT_TOKEN_TO_BE_REPLACED