Nineteen-year-old Lloyd Harris will jet into South Africa next week as part of the South African Davis Cup squad to play Luxembourg from 4-6 March at the Irene Country Club.
Harris who is playing his first ATP Challenge this week in Japan upset fifth seed Hiroki Moriya from Japan 4-6 6-3 7-6 (4) to move into the quarter-finals where he will meet another Japanese star, Yuichi Sugita the top seed on Friday.
The timing of Harris fine form is perfect as South African Davis Cup Captain, Marcos Ondruska has indicated that Harris could well be named as the second singles player with Tucker Vorster in the final South African team to play Luxembourg in the crucial Euro Africa Group 2 Davis Cup clash in Pretoria next weekend. If Harris is named by Ondruska it will be his first official outing in the green and gold for South Africa in Davis Cup competition.
Harris, part of Team South Africa at the 2014 Youth Olympic Games in China, was also rewarded for his fine form when the International Tennis Federation confirmed on Monday that Harris has received a travel grant to assist him with travel expenses. This grant is part of the ITF Development Programme, which is financed by the ITF and the Grand Slam® Development Fund (GSDF).
During the period 1986 – 2014 over US$ 92 million has been invested by the ITF and the Grand Slam nations in tennis development activities in 150 countries worldwide.  In 2014, US$ 4.34 million was spent on the Development Programme with US$ 2.63 million being invested by the ITF and the balance of US$ 1.71 million contributed by the Grand Slam nations to the Grand Slam Development Fund.
With the aim of raising the level of tennis worldwide and increasing the number of countries competing in mainstream international tennis, the Development Programme includes a broad range of initiatives in less developed countries ranging from the grass roots to Grand Slams.
Activities include ITF/GSDF touring teams, funding for junior and professional tournaments, training centres, coaches education, the supply of tennis equipment and the ITF Junior Tennis Initiative – a 14 & under player development programme, which encompasses Tennis10s (School Tennis Initiative) and Performance Tennis Initiative programmes.
Special emphasis has been placed on junior tennis where regional tournament circuits have been developed and teams of young players compete outside their own region.
In 2014, 26 regional circuits were supported by the Development Programme providing much needed competition for the best players at 18, 16, 14, 13 and 12 & under age groups across the globe (Central America & Caribbean, South America, Eastern Europe, Africa, Asia and Pacific Oceania).
Players who perform well at these regional circuits are invited to join an international touring team.
The ITF/GSDF touring team programme aims to facilitate the transition of talented players through regional and international competitions and onto the professional ranks.
In 2014, there were 21 ITF/GSDF Touring Teams involving 123 players from 61 different countries.
Former ITF/GSDF Touring Team members include: Gustavo Kuerten (Brazil), Nicolas Massu (Chile), Nicolas Lapentti (Ecuador), Leander Paes and Mahesh Bhupathi (India), Angelique Widjaja (Indonesia), Eleni Daniilidou (Greece), Younes El Aynaoui (Morocco), Paradorn Srichaphan (Thailand), Cara Black (Zimbabwe), Jarkko Nieminen (Finland), Florin Mergea (Romania), Marcos Baghdatis (Cyprus), Kateryna Bondarenko (Ukraine), Viktoria Azarenka (Belarus), Uladzimir Ignatik (Belarus),  Ricardas Berankis (Lithuania) and Li Na (China).

Programme for the tie:
Friday 4 March: 9.45am: Opening Ceremony. The first singles match will start at 10am with the second rubber following immediately thereafter.
Saturday 5 March: 12 noon: Doubles Match
Sunday 6 March: 10am: First reverse singles match, followed by final singles match.
All the matches are played as the best of five sets until a result has been achieved. 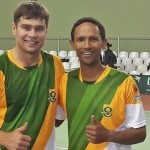 Moodie heads for US

Tokyo looms, again, We don’t know for sure in what shape of form the Olympics and Paralympics will take place in July to September and if anything 2020 taught us to take nothing for granted. What we do know is that if Tokyo 2020 +1 does go ahead, it will do so against a new-found back drop where simply taking… END_OF_DOCUMENT_TOKEN_TO_BE_REPLACED