The 27-year-old Karatsev saved the two break points he faced to win in 1hr 15m, becoming the third Russian champion this season. Daniil Medvedev and Andrey Rublev are the others.

The 42nd-ranked Karatsev has only been beaten by Novak Djokovic and Dominic Thiem in 14 matches this year. He beat top-seeded Rublev 6-2, 4-6, 6-4 in their semi-final, when he claimed his fourth consecutive win over a seeded player at the hard-court tournament.

Harris was also going for his first title after becoming the first qualifier to reach the final. He had gone into the event ranked No81 in the world but is set to move into the top 70 when the new rankings are released. 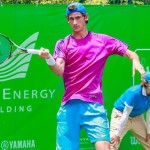 Harris on the rise after two Futures wins

Tokyo looms, again, We don’t know for sure in what shape of form the Olympics and Paralympics will take place in July to September and if anything 2020 taught us to take nothing for granted. What we do know is that if Tokyo 2020 +1 does go ahead, it will do so against a new-found back drop where simply taking… END_OF_DOCUMENT_TOKEN_TO_BE_REPLACED