Lloyd Harris saved the day for SA with a straight-sets 7-6 (4) 6-0 7-5 win over Benjamin Hannestad in the second rubber at the Ceres Park & Arena.

Earlier in the day, South Africa found themselves 1-0 down in the tie after Denmark’s No 1, Frederik Nielsen, defeated SA No 2 Nik Scholtz (below) 6-4 6-2 6-3 in a clash where class prevailed over endeavour.

The KIA South Africa team captain, Marcos Ondruska, had mixed feelings at the end. ‘It’s not where we wanted to be, but on the day neither team gave away anything,’ said Ondruska.

‘Each team had the advantage at various stages today. Our players showed that they are going from strength to strength.’

Harris said he went into his match feeling some pressure after South Africa lost the first rubber, but had set out to play the way he wanted to play. In the end, he felt had achieved that objective.

‘Initially my first serves didn’t quite have the intensity, but I was able to step up a level or two to take the tie-break by a fair margin,’ said SA’s No 1-ranked player and a 2014 Youth Olympian. ‘I was looking to be aggressive and enjoyed some good passages of play.’

Hannestad, apart from his second-set lapse, gave a good account of himself and his game seemed to feed off Harris’ pace. But on the day, Lloyd seemed to have the measure of the slowish surface and was able to adapt his playing pattern accordingly.

Harris will be going into Sunday’s reverse singles high on confidence against Nielsen, who will be in action sooner when he lines up alongside Thomas Kromann in Saturday’s doubles rubber against SA’s top-ranked doubles player, Raven Klaasen and Ruan Roelofse.

Klaasen is far and away the best doubles player in the tie, and together with Roelofse are strongly fancied to pick up South Africa’s next win in the tie. If a SA victory does materialise, Ondruska’s squad will be looking to pick up one win from Sunday’s two singles rubbers to gain promotion to Group 1.

The doubles rubber on Saturday starts at 13:00pm (SA time). 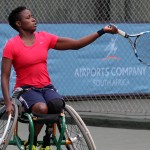 First round exit for Chani

By GARY LEMKE in Tokyo On the third day of staying in the Paralympic village bubble “it” finally dawned on me. “It” wasn’t the sheer visual aspect of the 4 000-plus Paralympians with disabilities all in the same environment of towering 17-storey apartments and surrounded by a 4km perimeter fence. Admittedly, that is the initial and most common conclusion of… END_OF_DOCUMENT_TOKEN_TO_BE_REPLACED