South Africa’s Lloyd Harris claimed another big scalp at the ATP 250 event in Adelaide when he reached the semi-finals to continue his strong run of form in 2020.

The 22-year-old from Cape Town took out the No4 seed, Pablo Carrena Busta, 6-3, 6-3 in the quarter-finals and in doing so he looked like the world’s higher ranked player instead of the No91 he stands at, compared to No30 of the Spaniard.

This was the first time the players have met, although the 28-year-old Spaniard is by far the more experienced, having won four times on the ATP Tour and amassed some $9-million in career prize money.

The semi-final result equals Harris’ best-ever showing in an ATP event. lst September, in China, he also reached the last foour of the Chengdu Open. Next up for Harris is the American qualifier Tommy Paul, who saw off Spain’s Albert Ramos Vinolas 6-3, 6-4.

Earlier in the week, Harris, who had to qualify for this event in. Australiia, beat Chile’s world No36 Christian Garin 7-6, 3-6, 6-4 in the first round and Serbia’s world No 40 Laslo Djere 7-6, 6-3 in the second round. At the ATP Cup last week, competing for Team SA, Harris lost twice, but both times in three sets.

Elsewhere in the Adelaide event, Alex De Minaur had to withdraw from the ATP250 in Adelaide because of an abdominal injury and he confirmed that he will not compete at the upcoming Australian Open for the same reason. 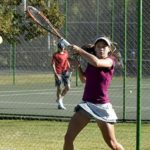 Scholtz misses out on quarters