Thabo Rateleki had never skied outside of South Africa before but he’s competing at the Youth Winter Games in Lausanne, Switzerland.

In fact, Rateleki had never been on a plane before. But, standing at the slalom finishing line, he was delighted to have completed the two runs on the icy slope at Les Diablerets. He and his teammate Hanle van der Merwe are Africa’s sole representatives at these Youth Olympic Games.

Going into the second run in second-to-last place, Thabo crossed the finish line to move into 39th position in the YOG slalom ranking. ‘I’m so excited to have finished,’ he said, out of breath after his race. ‘The slope was very icy. But I did it and it’s great. I went down till the finish line. In South Africa, it’s very different. It’s not so steep and the snow is softer.’

Until now, Thabo’s sights had not extended far beyond Tiffindell, the only ski resort in South Africa. Located at an altitude of 2 700m, close to the border with Lesotho, the resort is open from June to September and consists of a single ski lift that serves two slopes, one of which is 500m long and has received International Ski Federation (FIS) authorisation to host international competitions. It was at Tiffindell that it all began for Thabo. ‘I started skiing when I was very small. It was my brother who inspired me; I saw him racing, with people cheering for him along the track. I saw the smile on his face and it inspired me.’

Thabo now trains at the Tiffindell Ski Academy, along with about 15 other skiers, during the season, and goes back home to Barkly at the weekend, taking the narrow, only partially paved mountain road. “My parents can afford the ski expenses,’ he explains. ‘My father works in the internet sector and my mother is at home taking care of four children.’

Thabo’s delight at the finish line was all the more refreshing given that, having turned 17 on 4 January, he had never been on a plane before coming to Switzerland, and had never seen mountains other than the Drakensberg. ‘We went from Johannesburg to Istanbul, and then we landed in Geneva,’ he explained.

It was also heartening to see his team-mate, Van der Merwe, give him a warm embrace in the mixed zone, with a flag in her hand. She also finished the slalom, in 37th place (out of 37, but no mean feat given that 41 athletes did not complete the race). ‘I’m very proud to have finished the race,’ she said. ‘I’m also very proud to have represented Africa. We are the only two athletes from Africa, and we had the opportunity to take a picture with the President of the IOC during the Opening Ceremony.’

Hanle, who was introduced to skiing on the day of her 11th birthday (‘It was a gift from my mom’), left South Africa several weeks ago to compete in her first giant slalom in Italy. At Tiffindell, the slope is too short to accommodate a giant slalom course. Hanle wasn’t able to finish the giant slalom event at Les Diablerets due to a problem with the ski lift, making the fact that she completed the slalom race all the sweeter. For Africa’s two YOG representatives, the important thing was not just to take part, but to finish. 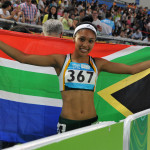 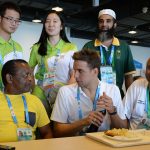 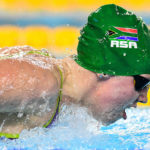 Team SA: How they fared on Day 2

Tokyo looms, again, We don’t know for sure in what shape of form the Olympics and Paralympics will take place in July to September and if anything 2020 taught us to take nothing for granted. What we do know is that if Tokyo 2020 +1 does go ahead, it will do so against a new-found back drop where simply taking… END_OF_DOCUMENT_TOKEN_TO_BE_REPLACED