Olympic bronze medal canoeist Bridgitte Hartley was crowned Victrix Ludorum and rising NCC star Louis Hattingh claimed the Victor Ludorum title at the recent KwaZulu-Natal Canoe Sprint Championships, held at Nagle Dam.
The duo led a strong performance by NCC, which also produced a number of other winners from the KZN Department of Sport EADP and NCC High Performance Programmes, which are hosted by the club.
There was little surprise that Hartley walked away with the ladies’ laurels; the Olympic bronze medallist over 500 metres in 2012 confirmed her status as one of the world’s best sprinters last year when she sped to a bronze medal in her favoured event at the World Championships in Moscow.
At Nagle Dam, she won all four K1 races, over 200, 500, 1 000 and 5 000 metres. She was also victorious in the three K2 races over 200, 500 and 1 000 metres. Hartley’s dominance underlined not only her power and ability, but also the fact that a considerable gap still exists between her and South Africa’s other leading female sprinters.
A tight programme meant she competed in six events in a single afternoon. ‘It was a little bit challenging because of the fact that you could never go max for all of them,’ Hartley said, ‘so I chose the 500 metres K1 to push my limits and I did go faster than last year, but we had a very strong tailwind and bumpy conditions. If it was calm, I would have maybe been able to go faster.
‘I think I had a good race and I recorded most of my races with my heart-rate strap. I’ve been collecting some data to see how my races are, so I feel confident for now that all is going well. My training has been going extremely well over the last few months, getting some personal bests in the gym and on the water. I am just looking forward to racing the South African Championships and hope for some good conditions and take it from there.’
While Hattingh’s strong showing was not unexpected, his speed might have surprised some, not least Dusi kingpin Andy Birkett, who finished second to Hattingh in the 1 000m sprint. Hattingh also roared to victory in the 500 metres, which Birkett did not contest, by almost three seconds.
Even over the 5 000 metres, an event to which Birkett is well suited, Hattingh pushed him all the way, with the former under-23 marathon world champion eventually triumphing by just under two seconds over Hattingh in a time of 21:43.08, which was over a minute clear of the third placed finisher.
‘He’s focusing quite a bit and he has never been one to do rivers. Last year he only just missed out on the A-Final at the Junior World Championships, so I think this year he really has a good shot at doing extremely well in the under-23 K1 event because he has quite a few years in that age category now. He will be able to compete in it and realise what the level is, and he is already at a good level, and he will be able to work out how much he needs to step up next year,’ Hartley said of Hattingh, who in 2014 won gold with Jean van der Westhuizen in the under-18 age division at the ICF Canoe Marathon World Championships.
‘I think his studies are a little bit challenging for him at the moment, but we all go through a stage of having to change over from school to university and trying to juggle training at 05:30 in the morning so you can go to classes. He definitely has the potential to improve more. It is just a matter of time.’
South Africa’s strength as a marathon paddling powerhouse is well documented and winning the men’s team title at the 2014 ICF Canoe Marathon World Championships in Oklahoma City underlined this fact. As river paddlers, which is a strong favourite of the typical South African canoeist, the country is right up there with the best.
Now, witnessing the growing interest in sprints is an exciting thing, said Hartley.
‘It was really exciting to see so many people entering in all the other age categories and I think that’s what made the weekend so busy for the organisers because they never anticipated such numbers.
‘There are definitely a lot more development paddlers taking part,’ she added. ‘I think we need to identify those who are shining a bit more than the rest because when it comes to sprinting it is more about a focus on an event and not just becoming fit and being able to run with your boat. The promising thing was that there were a lot more C1s than we have had before at the KZN Champs.
‘Also, looking at the number of guppies that lined up for all the events, it was really exciting and they all raced each other quite hard.’
NCC General Manager Brett Austen Smith was excited by the results of his top paddlers, but just as thrilled to have 16 development paddlers from the club take part in the provincial championships. He said it was further evidence of the massive impact the KwaZulu-Natal Department of Sport and Recreation is making with their support of canoeing development.
‘I was thrilled to see so many NCC Development paddlers at the regatta,’ he said, ‘and especially excited to see our paddlers in their first ever C1 race. We really have moved so far in the last 12 months. However, it is the next year that makes me super-excited. I can’t wait to see the effect that our Development and High Performance programmes will have on results. Very exciting times ahead indeed.’ 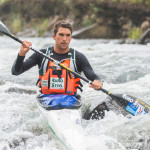