After London Paralympics bronze medallist Achmat Hassiem had acted as team flag bearer at the opening ceremony the team ended the first day with a fifth and eighth place.

London gold medallist in the 50-metre free style, Charl Bouwer did not start the 200m Individual Medley. But as his fellow Paralympian and now part of team management, Tadhg Slattery said: “This isn’t his favourite event and those are still coming up later this week.”

In his absence it was Ihar Boki, the Belarussian athlete who stole some of Bouwer’s thunder in London, who took the honours in a world record time of 2min 03.79 seconds.

Then it was Herbst who swam to fifth spot in his backstroke event with a time of 1:16.94. “His first 50m looked very strong but he struggled in the last 50m and had no power off the wall to finish,” said Slattery.

Herbst had this to say off his race: The first day didn’t quite go as I expected. I swam my 100m backstroke tonight. I had a great first 50m… but finished 5th and not a good time either. I still can’t find an explanation for this that makes sense. I guess this is part of the game. It can only get better from here. Tomorrow is the 50m freestyle.”

Port Elizabeth’s Kevin Paul, a gold medallist at the Beijing Paralympics and silver medallist in London, was in action for the 100m freestyle (S10), not his favourite event either and he took eight place in 55.89. Race winner was Brazil’s Andre Brasil in 51.57.

“Kevin had the perfect dive to start off with,” said Slattery but the Brazilian and US swimmers were just too strong for him. He had a good start and good finish though.”

SA swimmers in action on Tuesday will be involved only in straight finals, with no heats involved. Adri Visser will swim in the 200m freestyle final (S5) and Herbst takes on the 50m (S9) freestyle final.

Therese on the mark 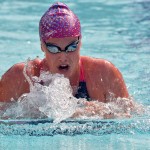 Gray picks up seven medals in Joburg… now for nationals