Before they even take the court, the SPAR Proteas have received kudos from the Silver Ferns, their next rivals in the international Netball Quad Series, as a team to respect and be wary of.
The New Zealand and South African sides will square off on Wednesday in the North Island city of Hamilton for the second round of the inaugural competition, which will also feature the clash between Australia and England, in Adelaide.
While the Proteas are smarting from a 25-goal loss to the Australian Diamonds at the weekend, Silver Ferns coach Janine Southby has no doubts the constantly-improving South African team are a side to be reckoned with.
‘They are a bit unorthodox in their style, with a fit little midcourt who could be quite a challenge,’ says Southby, who made her coaching debut for New Zealand last Saturday in a 26-goal victory over the lacklustre English Roses.
‘The Proteas’ goal shoot [Lenize Potgieter] has a strong shot and she put some great shots up against Australia. There are definitely some great players amongst them. We respect that it will be a tough game and we will have to put out our best performance.’
The Proteas coaches Norma Plummer and Nicole Cusack also believe their team has the skills and enthusiasm to foot it with the New Zealanders, ranked No. 2 in the world, but they are simply lacking in experience at the top international level.
Cusack, a former Australian international shooter, praised her players for their ability to learn so rapidly in this campaign. ‘They are so keen, and so quick to pick things up. Some of the older girls say ‘I wish I had known this 10 years ago!’ This Quad Series allows them to learn so much from playing the best teams in the world,’ Cusack says.
Since arriving in Hamilton on Sunday (where the temperature has been a nippy 12 degrees Celcius), the Proteas have had two training sessions a day, focusing on combating the New Zealand style of play.
‘Before the test against Australia, we worked on the one-on-one defence, but now we’re getting the girls used to the New Zealand zone style of play,’ says Cusack. ‘We want to give the few who haven’t played a lot of international netball before a taste of that.’
Although the Silver Ferns have been hit hard by illness, injury and unavailability leading in to this series, they have already shown their depth by producing some potent new combinations in their 65-39 victory over England.
‘There will be a lot of aerial ball coming in to the circle for our defenders to deal with, and we have to keep moving the ball on attack to draw the spaces for our attackers. We can expect the typical Kiwi style of zone defence, clogging up the midcourt for us,’ Cusack says.
Lifting their spirits after the loss to Australia has not been a problem for the Proteas management team. ‘While the players were disappointed with the loss, because they always want to do better, they definitely saw an improvement in their game from the last time they played Australia,’ says Cusack.  ‘They were keen to look at the video analysis and see what other options they could have taken. But they are upbeat and so are we.’
While the Proteas are determined to give the Silver Ferns a run for their money at the Claudelands Arena venue, the coaching team want to give more players the opportunity of international exposure.
‘We want to be competitive, and keep the score-line close. We’re definitely out to have a good go at them,’ says Cusack.  ‘But we also want to put some fresh legs out there. But there are some young players who are quite capable of matching it out there. They might go out there and blitz it, so you’ve got to give them that opportunity.’
Players like goalkeeper Jeanie Steyn, and shooters Renske Stolz and Siggie Burger, who all made their international debuts this year against Wales.
After this test, the Proteas will leave New Zealand for Melbourne, where they will play the England Roses on Sunday. 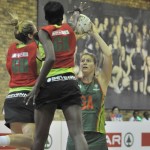 SA Fast5 netballers must bounce back against Aussies 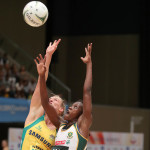 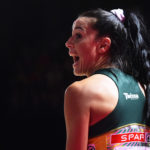