Heigh ho, heigh ho… it’s off to Rio de Janeiro for Chad Ho as the Olympic 10km Marathon qualifiers wrapped up in Setubal, Portugal on Sunday.
Ho, who turns 26 later this month, added his name to that of Michele Weber who had qualified in sixth spot the previous day.
But his qualification was a lot more nail biting than his KwaZulu-Natal counterpart as he ended 11th in a time of 1hr 52min 31.60sec. The men’s race winner, like Saturday’s women’s race, came from China, in the shape of Lijun Zu in 1:52:18.20.
Only the first nine places were guaranteed places for the Olympic open-water event but the fact that Australia and Germany both had two swimmers in the top nine and only one spot is permitted per country,  meant that Ho was the ninth qualifier.
‘It was a tough race and I had to dig deep in the last 200m but overall I am so happy I have done it! Thank you to everyone who has supported me and will continue to support me! Rio – Here I come!’ was Ho’s initial reaction on social media website Facebook when he learnt of his qualifying swim.
Ho’s fellow South African and 2012 Olympian, Troy Prinsloo, ended in 39th spot, the Dubai based swimmer clocking a time of 1:54.42.90.
A field of 61 started the race, in water temperatures of 21 degrees Celsius and an air temperature of 27º and 53 entrants finished the gruelling event.
Rio will be Ho’s second Olympics after he swum for South Africa at the 2008 Beijing Olympics were he placed ninth in a time of 1:52:13.1. 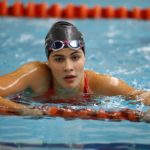 Double delight for Meder in the pool

Bronze for SA in Pan Pacs

Tokyo looms, again, We don’t know for sure in what shape of form the Olympics and Paralympics will take place in July to September and if anything 2020 taught us to take nothing for granted. What we do know is that if Tokyo 2020 +1 does go ahead, it will do so against a new-found back drop where simply taking… END_OF_DOCUMENT_TOKEN_TO_BE_REPLACED