A look at how those athletes in action on day 10 of the Commonwealth Games in Glasgow fared on Saturday:

Men’s 1500m final: Johan Cronje finished fourth in 3:39.65, behind Kenyan James Magut, who won gold in 3:39.31. Cronje was in bronze medal territory until the final two strides when pipped on the line by New Zealand’s Nick Willis.

Men’s triple jump final: Khotso Mokoena won the gold medal with a leap of 17.20m, a season’s best and just 0.05cm off his South African record.

Men’s 4x100m relay final: South Africa’s Akani Simbine flew down the final straight to pull his team through to fourth in 38.35. Jamaica broke the Games record with 37.58, followed by England in 38.02 with Trinidad & Tobago third in 38.10.

Women’s play-off, 3rd and 4th place: South Africa went down 5-2 to New Zealand to finish fourth on the table.

Women’s lightweight, Group A: Competing at the Clyde Auditorium, 28-year-old Northern Cape athlete Chantell Stierman ended fourth in her group with a total weight of 82.4kg. Nigeria’s Esther Oyema won gold with a total of 136kg. 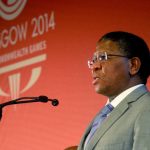