How those South Africans in action on day three of the Commonwealth Games in Glasgow fared on Saturday (all times local, for SA add one hour):

Men’s -90kg Round of 16: Zack Piontek reached the quarter-finals by beating Louis Plevin (Guernsey) by Uchi-mata after just 19 seconds.
In the quarter-finals he beat Andrew Burns (Scotland) by Tai-otoshi after 2:28 to reach the semi-finals.
In the semi-finals he beat Johannesburg-born New Zealander Ryan Dill-Russell by Sumi-gaeshi to reach the final, which he won by beating Scotland’s Matthew Pursey on a yuko.
Men’s +100kg, Quarter-finals: Ruan Snyman won his fight against Martin Rygielski (Canada) on a shido (2-1).
In the semi-finals Snyman beat Australia’s Jake Andrewartha by Uchi-mata to reach the final. There he lost to the host nation’s Christopher Sherrington by ippon.

Men’s 200m butterfly heats: Sebastien Rousseau won his heat in 1min 57.84sec to qualify third fastest for the final, with countryman Dylan Bosch coming home third (ninth overall) in 1:58.95.
Chad le Clos finished second in his heat in 1:57.45 to qualify second fastest for the final.
In the final Le Clos won gold in 1:55.07 and Sebastien Rousseau the bronze medal.

Women’s 4x200m freestyle: South Africa reached the final by finishing second in their heat behind Canada in 8:14.19. In the final they finished out the medals but broke the national record by 3 seconds.

South Africa opened their campaign with a 36-0 victory over Trinidad and Tobago in their first pool match. They then went on to whitewash the Cook Islands 50-0 in their second match and also kept it scoreless against Kenya, 20-0.

Mixed team relay: SA’s bronze medallist in the individual men’s event, Richard Murray anchored SA to the silver medal in the mixed event. The team was made up of Murray, Henri Schoeman, Kate Roberts and Gill Sanders. They were 49sec behind gold medallists England (1hr 13min 24sec) and just a second ahead of bronze medallists Australia although Murray had things in the bag at that stage. This is triathlon’s second medal of the Games. 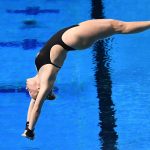 Dalle Ave looks to be in medals

By GARY LEMKE in Tokyo On the third day of staying in the Paralympic village bubble “it” finally dawned on me. “It” wasn’t the sheer visual aspect of the 4 000-plus Paralympians with disabilities all in the same environment of towering 17-storey apartments and surrounded by a 4km perimeter fence. Admittedly, that is the initial and most common conclusion of… END_OF_DOCUMENT_TOKEN_TO_BE_REPLACED