London Olympics sailors Roger Hudson and Asenathi Jim have taken a massive stride towards achieving their Olympic goal by winning their first ever major international event at the Delta Lloyd Regatta in Holland.

Going into the final medal race in fourth position, the duo, pictured right, managed to negotiate their way through the fleet to finish second and take the overall gold ahead of Britain’s Olympic silver medallist Luke Patience and teammate Elliot Willis.

The win in Medemblik marks the first major win for Jim and Hudson as a team, exactly three years after they raced there in their first regatta together in the 470 class.

ÔÇ£We knew we had to perform and it seems that under pressure we seem to do really well. We had that pressure on us and we both love it,ÔÇØ said a thrilled Jim afterwards.

ÔÇ£It’s a big breakthrough for us and it’s great,ÔÇØ added Hudson. ÔÇ£It’s come at a really good time to motivate us and to keep us rolling with our project, which is obviously a four-year project going towards Rio [Olympic Games in 2016].

ÔÇ£It’s wonderful to make this breakthrough together. We’re having a good few regattas in a row and we have a soft spot for this one, as this is where we began our campaign three years ago so we’re very happy to have had a victory here.

ÔÇ£It’s also a nice moment to briefly reflect on what we’ve managed to achieve so far. Of course very soon after a short celebration it’ll be back to business. We’ve got two years to go to Rio and we have to keep making further breakthroughs to get to where we want to there.ÔÇØ

Having been on the road for two months, Hudson and Jim will now return home to Cape Town for three weeks before continuing their campaign in Europe. 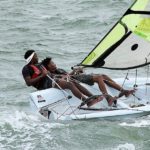 SA’s developing sailors to battle it out in historic regatta 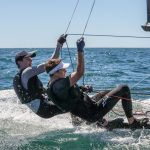