Heading into the penultimate stage, the 21-year-old had a 57-second gap to make up on his compatriot, though few predicted that the time trial specialist Roglic could actually cede the yellow jersey in a test against the clock.

However, Roglic shed time from the beginning, falling 13 seconds down at the first checkpoint of the day after 14km, and 36 seconds at the end of the flat 30km section of the course. Pogacar flew up the climb as Roglic’s struggles continued with a less-than-ideal swap from his TT bike to a road bike.

He was still 20 seconds to the good at that point but seemed to collapse as he climbed the first category mountain, which was 6km long at an average of 8.3 per cent. In a matter of seconds, his virtual lead evaporated to a deficit, going into the red at the 3.9km mark and never looking like returning to green. He crossed the final checkpoint, 2.7km out, a devastating 1:22 down.

By the time Pogačar crossed the line in a time of 55:55 – 1:21 ahead of the previous fastest man – the race was already over with the UAE leader having surged up La Planche 22 seconds faster than anyone else, setting a new all-time climbing record in the process, despite changing his bike at the bottom.

Roglic battled through the final kilometres, but only kept losing time. His Tour de France dream had come to an end in the Vosges mountains as he collapsed after the finish, consoled by his waiting teammates.

Richie Porte (Trek-Segafredo), who lay 1:39 back in the morning, eased into the final podium spot, finishing third on the stage with a time of 57:16. After the astonishing events, Pogacar heads to Paris with a 59-second advantage over Roglic, while Porte lies in third, 3:30 down.

As well as the yellow jersey, Pogacar will take home the white jersey of best young rider, plus the polka dot jersey – the first rider to win all three at one Tour de France in history.

South Africa’s Ryan Gibbons, who has been riding the Tour with a broken rib, finished the time trial in 56th position, 6min 57sec down, while Daryl Impey, for Mitchelton-Scott, was timed 149th, 9:49 behind.

Overall, Impey heads to Paris in 97th position, while Gibbons in his debut Tour is 121st. 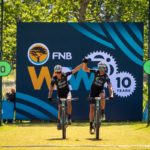 Top SA race gets even tougher on dopers

Tokyo looms, again, We don’t know for sure in what shape of form the Olympics and Paralympics will take place in July to September and if anything 2020 taught us to take nothing for granted. What we do know is that if Tokyo 2020 +1 does go ahead, it will do so against a new-found back drop where simply taking… END_OF_DOCUMENT_TOKEN_TO_BE_REPLACED