The West Rand athlete, who recently celebrated her 24th birthday, was out training with fellow champion athlete Rene Kalmer when the incident occurred.

A car allegedly overtook another vehicle on a solid white line and caught Van Blerk a glancing blow from behind.

“Wow, I was very lucky on Thursday,” reflected Van Blerk. “I’ve got a whole lot more aches and pains when I run now but I’m taking it with a smile because at least I didn’t break anything.

“I’m hoping to be back to racing at the next Spar race in Pretoria on 27 August. I must just sort out all these aches and pains first.

Kalmer was on hand to assist her close friend and training partner after the accident.

This was at least the second vehicle/runner related incident in recent months after 2008 Olympic 1500-metre finalist Juan van Deventer was also hit by a car while training. Unlike Van Blerk though, he wasn’t as lucky and had to have on operation to fix his knee.

Van Deventer is currently on the road to recovery. 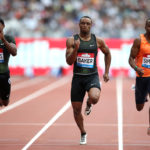 Simbine sprints to bronze in London

Stars take to the track 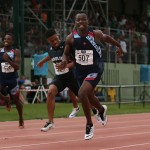 Munyai aims to make his mark against role model in Manchester